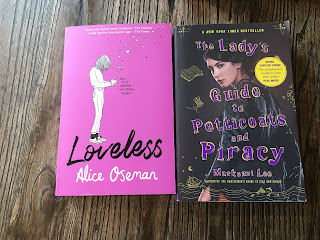 It’s Ace Week! A week set apart to raise awareness of identities on the asexual/aromantic spectrum and to campaign on issues that matter to us. For example, why young people should learn about ace-spec identities in school. This year, I was asked by Stonewall to make a 59 second video on that topic, which should appear on their TikTok during this week.

But I’ve also been reading. To help with my own writing, I asked around for recommendations of YA fiction with ace representation. Then I bought two of them and had a read.

The books in question are: Loveless by Alice Oseman (author of Heartstopper) and The Lady’s Guide to Petticoats and Piracy by Mackenzi Lee. These are two very different books. Loveless is a contemporary story about a girl called Georgia who goes to university hoping to find the big romance that has so far eluded her, but ends up finding herself. The Lady’s Guide is a historical adventure set in an unspecified part of the 18th century, about a girl called Felicity who wants to be a doctor, and ends up in a variety of locations, including a cabinet of curiosities in Zürich and a Barbary Corsair ship.

From reading the blurbs, I expected to enjoy the second one better, but it didn’t turn out that way. I found Loveless to be a much better-written book, and much more emotional (which I like). It’s also much more explicit about asexuality, aromanticism and other queer identities, since that is the main focus of the plot. It does have a lot of F-bombs, which - for me - are very jarring, as they feel like a kind of verbal rape whenever I see or hear them. This is definitely part of my ace identity, but apparently not everyone’s. But I found Georgia to be a very engaging character, full of self-doubt, but also full of love and friendship. It wasn’t always an easy read, emotionally speaking. It was all too easy to compare and contrast my own university experience and wish for a main character I could relate to in all respects. (Or even a side character, come to that. It’s all too easy to feel unseen when you’re part of a broad spectrum in a small minority without much representation. But we’ll get there, people!)

By contrast, I found Felicity in The Lady’s Guide to be annoying and kind of wearing. This is a very feminist book. And I’ve been hurt a lot by feminism in the past. (The current clash between second-wave feminism and the trans community is just an example of how easily this can happen). Why is Felicity so angry all the time? Her constant rants against men just wore me down. On top of that, there were too many anachronisms for me to maintain the illusion of the story. The author is American, and some of the details were just wrong for Britain in any era, never mind the 1700s (poison oak??). And that’s a shame because I really wanted to enjoy this book. The blurb made me think of my own Silver Hands. But it was not to be.

When it comes to ace-rep, The Lady’s Guide is pretty low-level. And that’s OK. We don’t want asexuality to be front and centre in every story. I would say the protagonists of both books are aromantic. But Felicity is much closer to the extreme edge of it (if that’s the right way of putting it). She doesn’t even like hugs, and her only passion is for medicine. Whereas Georgia loves romance in the abstract (she loves reading fanfic and fantasising about falling in love). But it turns out her expectations don’t match the reality of who she is. I can relate to that. Interestingly, both girls feel and express a lot of love in their female friendships, which isn’t something I can relate to much. But I’m sure others will.

So, I’m still looking for that perfect asexual romance. (Aside from ones I write myself, that is). If you’ve got any suggestions that aren’t too scarily feminist (can I say that?!) please drop them in the comments.