Showing posts from January, 2022
Show All

First Voyage of the Coracle 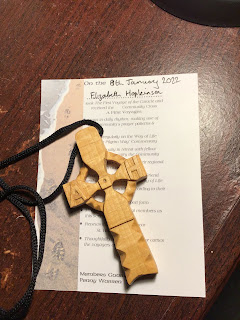 This Saturday I became a full member of the Community of Aidan & Hilda , a dispersed New Monastic community inspired by Celtic Christian spirituality of the 1st millennium AD. Its members come from many different countries and branches of the church, but all follow a common Way of Life and daily prayer pattern, as well as meeting and supporting each other in various ways. (Mostly via Zoom since I’ve joined, for obvious reasons!) The vow-taking ceremony is called First Voyage of the Coracle, and the newly-vowed member is known as a Voyager. Any die-hard Narnia fans like me will remember a coracle as being the small, round boat Reepicheep the mouse finds in The Voyage of the Dawn Treader , and which eventually takes him to Aslan’s country. As a North Irishman and a medievalist, CS Lewis was influenced in writing Dawn Treader by the ancient Celtic tradition of the imrama journey, a symbolic, spiritual voyage that changes the voyager. One such example from medieval times is the Voyag
Post a Comment
Read more
More posts