Showing posts from May, 2016
Show All

31st May is blog link-up day for fairy tale anthology  The Forgotten and the Fantastical II,  published by Mothers' Milk Books.   For the link-up, I'd like to share with you this video from the Royal Ballet, about reviving the 1946 production of  Sleeping Beauty. My contribution to the anthology, a re-imagining of  Sleeping Beauty  called   Rêve/Revival,  was partly inspired by footage of an old Royal Ballet production of  Sleeping Beauty , starring Margot Fonteyn. The version I watched was recorded especially for TV in 1955, but the live theatre version was staged in 1946, to re-open the Royal Opera House after the Second World War. I didn't know about the 1946 version when I wrote  Rêve/Revival , so it's fascinating to discover more connections between  Sleeping Beauty , war and new beginnings.  In my story, both the Napoleonic and First World Wars change the map forever, while humans and fairies find a way to end the conflict between their two races.
Post a Comment
Read more

In my last blog, I talked about a book I read while I was ill ( The Silver Metal Lover by Tanith Lee). Well, as it happens, I read quite a lot of books while I was ill - there wasn't much else to do! One of them was the very influential I Am Malala, which led me to produce this re-write of Cinderella, highlighting the difficulty of education for girls in many parts of the world. Please watch and share!  And if you want to know more about the work of the Malala Fund, and how you can help make a difference, visit them at malala.org.
Post a Comment
Read more 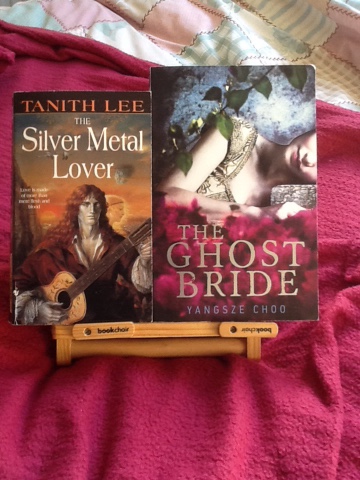 The Silver Metal Love r, here pictured with another unusual romance, The Ghost Bride. During the colder months - while I was ill, in fact - I read Tanith Lee's The Silver Metal Lover for the first time. It was an emotional read, and it's only now that enough time has passed for me to be able to write about it objectively. Briefly, the book is about a girl called Jane, who falls in love with a robot called Silver.  Silver is basically the perfect man - he's been designed to bring pleasure and happiness to people.  But Jane finds it hard to believe that a robot could genuinely be in love with her.  Meanwhile, Silver's creators have pronounced him "faulty" and want to destroy him. It was only when I went looking for fan art of Silver, that I saw someone had suggested the tale is based on the myth of Persephone.  This got me thinking about other aspects of the story, and realising that the book is actually packed with references to Greek myth (and a little bit to
Post a Comment
Read more
More posts