Showing posts from October, 2017
Show All

Holidays with Hitler: The Seduction of Nostopia 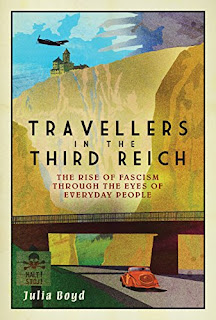 Travellers in the Third Reich, Julia Boyd This week, I have been reading Travellers in the Third Reich by Julia Boyd.  It might sound like a grim read, but actually it's fascinating.  According to the blurb: Travellers in the Third Reich  is an extraordinary history of the rise of the Nazis based on fascinating first-hand accounts, drawing together a multitude of voices and stories, including students, politicians, musicians, diplomats, schoolchildren, communists, scholars, athletes, poets, journalists, fascists, artists, tourists, even celebrities like Charles Lindbergh and Samuel Beckett. Their experiences create a remarkable three-dimensional picture of Germany under Hitler – one so palpable that the reader will feel, hear, even breathe the atmosphere. And it's true.  You really do feel like you're there, all the way from 1919 to 1945.  What may seem incredible to some is that foreigners (especially British and American) kept on holidaying in Germany and sending
Post a Comment
Read more
More posts