Showing posts from March, 2022
Show All

Help! I’m Made of Glass! 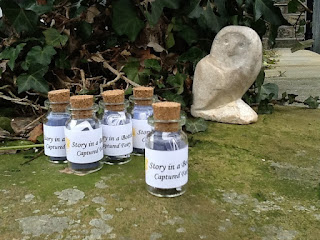 I’ve written on a third collection of Asexual Fairy Tales. It’s crowdfunding now on this link . One of the tales I discovered - and which I retell in the book - comes from the pen of Miguel de Cervantes, the 17th-century author of  Don Quixote.  It’s called “The Glass Lawyer”. The title character Tomás Rodaja, a lawyer from Salamanca, has never been in love. When a lady’s advances to him are snubbed, she feeds him a potion she believes to be an aphrodisiac. But instead of having the effects she hopes, it makes him ill. And when he recovers, he finds he has developed a strange condition. He believes he is made of glass. I won’t tell you the whole story. (You’ll have to wait for the book!) But Tomás becomes terrified of being touched in case he breaks, and travels around in a packing case full of straw. What is interesting about this story is that, although it’s fictitious, there was a condition known as Glass Delusion, documented from the Middle Ages to the 19th century. Sufferers inclu
Post a Comment
Read more
More posts