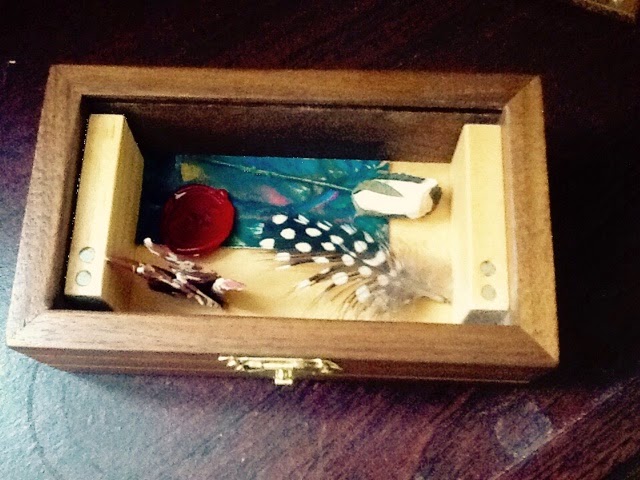 In December, I wrote a blog about The Box of Delights, which fans of the Christmas classic were kind enough to enjoy.  For my birthday, I received my very own box of delights, a keepsake box with a secret way of opening.  What could I possibly keep in it?  How could I make it as magical as the box Cole Hawlings gives to Kay Harker?  Obviously, it couldn't really transport me into the past or on an adventure with Herne the Hunter.  Or could it?  What if I turned it into my own miniature cabinet of curiosities?
Cabinets of curiosity have fascinated me for a while now.  They feature in Brian Selznick's wonderful children's book, Wonderstruck.  I once went to a multi-arts event entirely inspired by them.  And I've just (in the last hour) looked round an exhibition very much in the spirit of the curiosity cabinet, Stranger Than Fiction by Joan Fontcuberta.   The artist has created photos (and actual taxidermy) of strange beasts, of the sort our ancestors used to collect and show to their friends - winged deer, tree-dwelling ducks, fossilised mermaids - all with their own backstories.  There are notes, "field drawings", biographies of the men who discovered them...  Now, that's what I call world-building!  To add to the eclectic mix, there's also a whole sub-section devoted to the miracles of a strange Karelian sect, again with artefacts - just the sort of thing for a cabinet of curiosities! 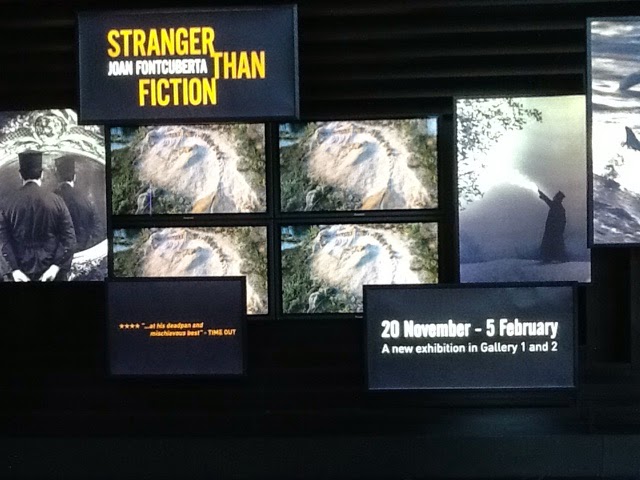 Cabinets of curiosities were the forerunners of museums.  They were private collections, housed in display cabinets or small rooms, often as fantastical as the objects within.  And with the early ones (before the late C18th) there was absolutely no categorisation.  Stuffed birds might sit next to cups made of shell, foreign masks, odd gadgets and the skeletons of animals with birth defects.  Basically, it was anything the collector found interesting.  We've probably all been like this at some time in our lives.  Children love to collect and hoard sticks, feathers, plastic toys, birthday cards etc.  Some of us never changed.  In preparing this blog, I've realised I keep my whole house as a cabinet of curiosities.  Wind chimes, Japanese calligraphy, a Burmese puppet, a plan of Captain Cook's Endeavour, a flute from Cameroon, original fantasy art and a 1960s school map of Great Britain are all in there.  Books overflow.  The walls are running out of picture space.  And, do you know what?  It's wonderful. 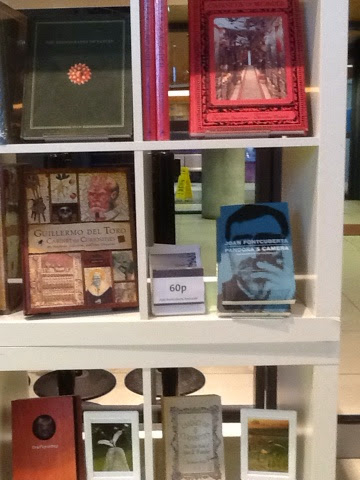 The museum shop where the exhibition is currently showing has this magnificent display of books relating to cabinets of curiosity.  I want them all, especially that big red one at the top!  But since I can't afford them, I've had to resort to making a Pinterest board about cabinets of curiosity instead.  Take a look.  You'll even find some of my weird collection in there!
http://pinterest.com/ElizHop1/cabinet-of-curiosities/
Posted by Elizabeth at 16:41 No comments: 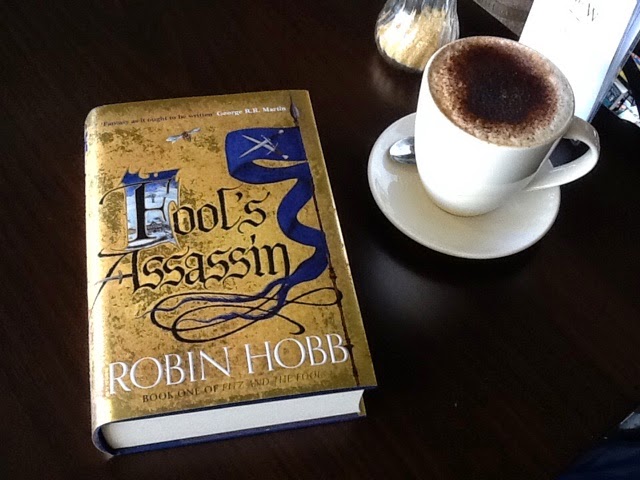 Well, it's 2015!  My Christmas decorations are coming down, which is very sad, but there are lots of things to look forward to in the new year.  Of course, no one can predict the future, but these are some of the arts and history things I'm looking forward to this year:
1. A glut of costume dramas exploding onto my TV as the new year kicks off.  The Musketeers, Grand Hotel, Foyle's War and Mr Selfridge, to name but four I know of.
2. Watching my two Christmas gift DVDs that I haven't yet seen: the new La Belle et la Bête and Jack and the Cuckoo-Clock Heart.
3. Going to the Sam Wannamaker Playhouse in London to see Farinelli and the King in February.  Not only is the play about my all-time 18th-century icon and the subject of one of my most popular blogs, but it's in a theatre I've been dying to see, and stars Iestyn Davies, one of my favourite countertenor singers.
4. The Manga Jiman Competition exhibition at the Embassy of Japan.  My daughter is involved in that one, so it will be particularly special.
5. The eagerly anticipated TV drama of Jonathan Strange & Mr Norrell in spring.  This is my favourite book, so I'm kind of dreading it too, but hopefully it will be good and do the book justice.
6. The centenary of Waterloo on 18th of June. Waterloo features in Jonathan Strange. And Sharpe.  And Vanity Fair...
7. Fool's Quest, the next book in the Fitz and the Fool trilogy, following the cliffhanger at the end of Fool's Assassin.  What will happen to poor little Bee?
I'm sure there'll be lots of other things, but that's enough to get us started.  Hopefully, I will post reviews of most of these either here or on Silver Petticoat Review (see side panel for link).  Have an arty new year!
Posted by Elizabeth at 16:30 No comments: