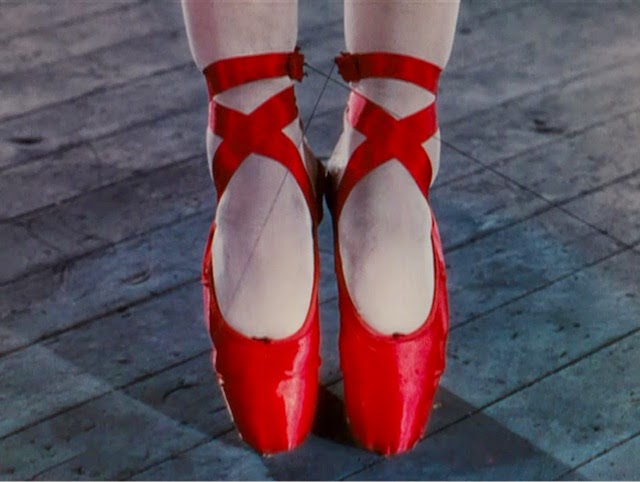 The Red Shoes: The Archers/J Arthur Rank, 1948
The other night, I was watching the classic 1948 film, The Red Shoes.  When the film was over, I decided to read up on the original tale by Hans Christian Anderson, which brought me back to the subject of amputation in fairy tales.
When I was writing my novel, Silver Hands (based on Grimm's fairy tale, The Handless Maiden) I had to think carefully about how I was going to approach amputation in my re-telling.  I decided early on that, in my version, the hands were not going to grow back as they do in my source tale.  The 2012 Paralympics made everyone in my country much more aware of the achievements of amputees.  In real life, limbs do not grow back; what can grow, however, is confidence and new abilities.  This was what I wanted to portray in Silver Hands.  Margaret learns new skills in painting and calligraphy, and gains the self-confidence to face up to Van Guelder, only after amputation.  She loses her hands to find herself.
But is this what the loss of the maiden's hands means in the source tale?  In her ongoing epistolary tale, Elk Lines, Sylvia V Linsteadt takes a different approach.  She links the withering and dropping off of her heroine, Eda's, hands with the annual shedding and regrowth of antlers undergone by elk (in common with deer etc.). For an elk, the dropping off of a body part is part of the natural rhythm of seasons, like the falling of autumn leaves.  In Sylvia Linsteadt's story, nature has become out of balance.  The elk's antlers are not growing back, and the loss of Eda's hands heralds the start of her journey back into the natural world.
But what about The Red Shoes?  In Hans Anderson's story, it seems that the shoes are associated with sin.  They draw her away from the holy worship of the church, and lead her to abandon her foster-mother in her illness to go to a ball instead.  When Karen finds she cannot stop dancing in the shoes, or take them off, she asks the executioner to chop off her feet instead.  However, the feet and shoes keep dancing on their own, and Karen is ultimately only redeemed through her death.
This reminds me of something in The Handless Maiden.  At the start of the story, the Evil One makes a claim on the maiden's life.  In the end, the only way she and her father can escape the Evil One is for her hands to be cut off.  This raises some questions about The Red Shoes.  Is the old soldier with the red beard the Devil?  (He sits outside the church, and later appears in the wild wood).  Or is he a foreshadowing of what Karen will become?  (He has crutches, as she will later have).
This idea of resisting the Devil or temptation through amputation recalls Jesus' words in the Sermon on the Mount: "And if your right hand causes you to stumble, cut it off and throw it away. It is better for you to lose one part of your body than for your whole body to go into hell." (Matthew 5:30 NIV). Of course, this is a kind of hyperbole or picture language; Jesus is not suggesting that his disciples actually cut off parts of their bodies.  But fairy tale is symbolic, is it not?
Resisting temptation, a natural season of loss, a new beginning.  What does amputation in fairy tale symbolise to you?
Sources:
The Complete Illustrated Works of Hans Christian Anderson (London: Chancellor Press, 1983)
The Complete Illustrated Works of The Brothers Grimm (London: Chancellor Press, 1984)
Elk Lines, copyright 2014, Sylvia V Linsteadt
The Holy Bible, New International Version, copyright 1973, 1978 1984, International Bible Society
Posted by Elizabeth at 19:24 No comments: 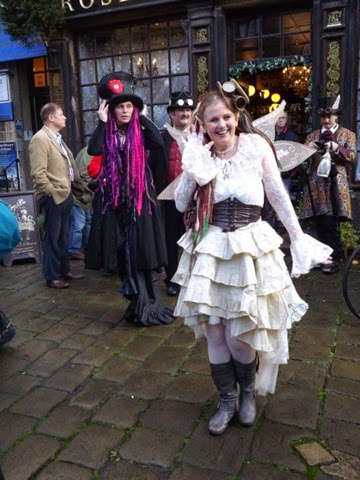 I don't know about you, but I do like a bit of steampunk.  I've written a few steampunk stories in my time, including The Marvellous Machine and Sense of Duty.  But I've never actually been to a steampunk event until today, when I decided to pay a visit to Haworth Steampunk Weekend.  It was a great chance to get free entertainment, shop for Christmas presents, and walk round one of my favourite local tourist spots in one of my (many) more flamboyant outfits, and still feel underdressed! 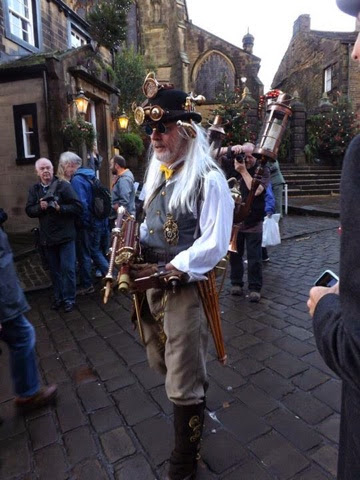 Unbelievably for Haworth in November, it was nice enough to eat lunch outdoors, while being serenaded by a band that included a sousaphone.  (Nobody can be uncheered by a sousaphone).  There was a craft fair, as well as all the usual Howorth shops.  But the best fun was to be had looking at people's outfits, which ranged from a mere nod towards steampunk fashion to fantastic creations that had obviously taken a lot of time and money to make.  One lady had a dress that was entirely printed with passages from Wuthering Heights.  There were also all sorts of gadgets, gizmos, cog wheels, goggles, mad hatters, brass accoutrements, corsets and boots.  I don't know what Emily, Charlotte or Anne would have made of the day, but I bet Branwell would have loved it! 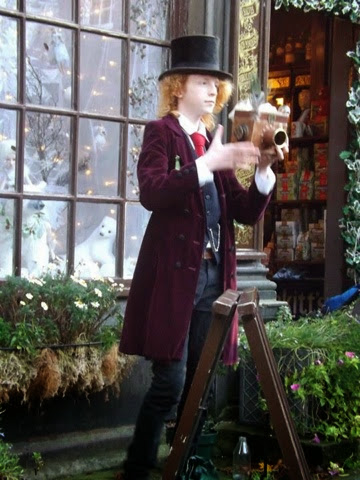 If you fancy a bit more steampunk in your weekend, I will be highlighting steampunk short animation Invention of Love on Silver Petticoat Review very soon.

Posted by Elizabeth at 19:46 No comments:

It's now the time of year when people usually start to ask the famous question, "What do you want for Christmas."  Usually, for me, it's books and films.  What more can anyone ask than a story that takes you away to a magical time and place?  Last week, I discovered that three animated films I had been waiting to be released have already been longlisted for Oscars.  One is already on DVD.  They're from three different countries and are all totally magical, and my wish  is now to see them all before next Christmas.

2.  Song of the Sea
This beautiful Irish film is made by the same people as The Secret of Kells, which I love.  It's about selkies.  What more can I say?  Think I might have to wait until next year before I can see it, though.

3.  The Tale of Princess Kaguya
This is my favourite Japanese fairy tale.  AND it's Studio Ghibli.  And I can't believe it hasn't been shown in England.  (Or Bradford, anyway.  And they call us the City of Film...)

Posted by Elizabeth at 14:28 No comments: