Following on from my last blog about bird lore, I came across a piece of artwork on Twitter (ironic!) that seemed to conjure up the spirit of Tammo ( the bird charmer character in my work-in-progress the Angelio Trilogy) perfectly.  It is by talented British artist, Rachel Toll (@Elidanza), who has kindly agreed to let me share it with you here. 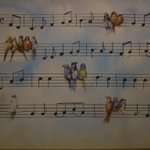 My character, Tammo, is given the ability to charm birds with his flute.  This can also cause him to form a close bond with the bird in question, as happens with his pet crow, Coronis.  If you think this idea sounds a lot like Mozart's The Magic Flute, you're right.  And that's why Tammo's sworn twin, Carlo, always calls him Tamino.

This piece of artwork seemed a perfect gift for Tammo.  (Perhaps I could give it as an Easter present to him!)  And since Tammo plays the flute, I had to try the tune on my flute too.  Because not all the notes were visible on Twitter, I improvised the bits I couldn't see, making this my own version of the piece.  Hope you enjoy it, Tammo!

Posted by Elizabeth at 15:06 No comments: 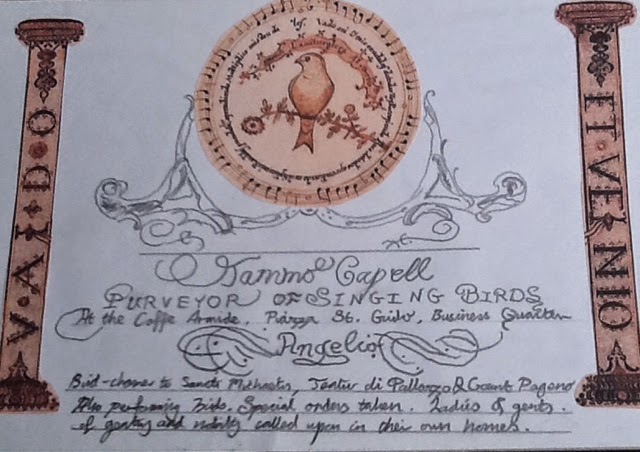 Spring has come to Britain at last!  It is April, when:
according to the poet Chaucer.  It's a time when birds fight for their territories, find their mates, build their nests and lay their eggs.  Outside my house, the favourite visitors are starlings, magpies, crows, pigeons and blue tits.  I'm sure we will see new young ones in the course of time.
While working on my Angelio books, I have turned up a lot of interesting research regarding birds.  I thought I would share some of it with you here.  Here are 10 interesting facts:
1.  A common trick for a pet goldfinch was to draw up a tiny gold bucket on a chain to get its drink of water.
2.  "Whistling bullfinches" could be taught to sing a selection of folk tunes.
3.  Castrati were taught to imitate birdsong in their vocal performances.
4.  In Sufism, the language of the birds is a mystical language of angels.  (See The Conference of the Birds by 12th century Persian poet Farid-al Din Attar).
5.  In medieval France, the "language of the birds" was a secret language used by troubadours.
6.  The male song thrush has a repertoire of over 100 phrases, which he can repeat.
7.  In Greek mythology, crows were originally white, but were turned black as a punishment for betraying him by the god Apollo.
7.  By tradition, the nightingale sings with a thorn pressed to its breast.
8.  The mistle thrush was said to speak 7 languages.
9.  Many people tried to catalogue birdsong as musical notation.
10.  The school for musically gifted children in Vienna was known as the Cage of Nightingales.
What interesting bird facts do you know?
Posted by Elizabeth at 16:45 No comments: