What Plato really said about love...

October 15, 2013
Like most people, I'd heard of Platonic love, but I didn't really know what it was.  I had some vague idea it was about being "just friends".  I also knew that Oscar Wilde defended himself against charges of homosexuality by invoking some ancient ideal of a noble friendship between an older and younger man, but I didn't really know what that was about either, or that the two were related.
Things only changed the other week when I was reading a book about Leonardo and Michelangelo - The Lost Battles by Jonathan Jones.  It says that Michelangelo defended himself against gossip over his male/male friendships by invoking Plato's Symposium. It also quotes a poem by Michelangelo, which says:
Well, alas!  How will it be heard?
the chaste desire that burns the interior of my heart
by those who in others always see themselves?
This certainly struck a chord with me, and is very relevant for Carlo and Tammo's coming relationship in the next episode of my Angelio trilogy.  I decided I needed to find out what Plato actually said. 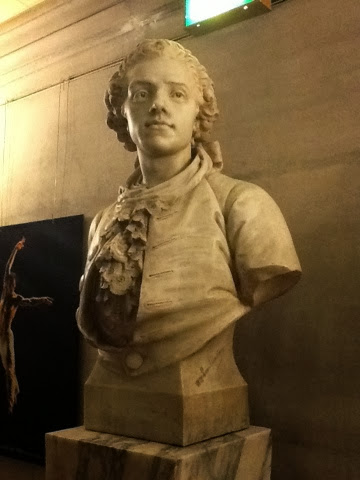 It turns out he said some very interesting things.  The Symposium is written as a conversation over dinner between Socrates and some other men.  (So a bit like the Book of Job, in that it explores issues through argument and different viewpoints).  I'm not going to relate the whole thing (you'll have to read it yourself!) but several things stood out for me:
1. It talks about Achilles and Patroclus "his lover".  As someone who really enjoyed Madeline Miller's The Song of Achilles, I couldn't help but find this interesting.
2. One of the characters argues that there were originally three sexes - male, female and androgynous.  (He then argues that they were split in half, and now always look for their other half, which to me is less interesting, but there you go!)
3. Two fantastic quotations.  "Evil is the vulgar lover who loves the body rather than the soul."  And, "Man should live in the contemplation of beauty absolute."
So, what is Platonic love, then?  Basically, it's a spiritual love rather than a physical one.  Michelangelo was celibate and had "chaste desire", but he was in love.  So is my Carlo, in much the same way.  Plato says this is the most noble kind of love.
Of course, then Plato goes and spoils it somewhat with some ancient world sexism (and possibly ageism). This pure love, in his Symposium,  only exists between an older man and a younger man, with the older man being the "lover" and the younger the "beloved".   (The character who talks about Patroclus and Achilles seems at great pains to point out that Achilles was the younger and prettier one, therefore Patroclus was "his lover").  There's no reason in my mind why you can't feel a pure, chaste love for someone older and less pretty than yourself, why you can't feel it towards the opposite gender, and why a woman can't feel it.  I think there could be some prejudice at work here!
To confuse matters, the Neoplatonic school of thought in the Renaissance said that pure love could be spiritual  and physical.  (So it could involve women - or men like Oscar Wilde).  For example, in John Donne's poem, "The Ecstasy", the lovers' souls mingle as they lie on a bank.  But then Donne says,
But O alas, so long, so far
Our bodies why do we forbear?
This seems like the opposite of Michelangelo's poem and, to my mind, isn't proper Platonic love.
Anyway, have a read for yourself and see what you think.  You can find the Symposium here:
http://classics.mit.edu/Plato/symposium.html
Books used:
Jones, Jonathan, The Lost Battles: Leonardo, Michelangelo & the Artistic Duel That Defined the Renaissance, (London; Simon & Schuster, 2010)
Donne, John, The Complete English Poems, ed. Christopher Ricks (London: Penguin, 1971)
asexuality chastity Michelangelo Plato Platonic love
Location: Clayton Clayton