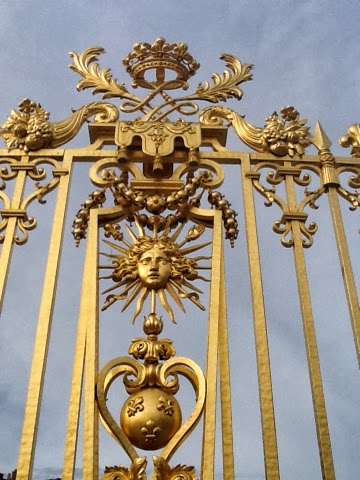 There seems to have been something almost mythical about my recent trip to Paris.  Three days.  Three Apollos.  Three Dianas.  The sun god and the moon goddess.  And, perhaps unsurprisingly, the Apollos were overtly on show, while the Dianas kept creeping up on me.
The first Apollo was that of the Palais Garnier, home of the National Opera of Paris, and also the Phantom of the Opera.  Apollo stands on the roof, holding up his golden lyre in his role as god of music and poetry.  And the whole building - inside and out - is a fairytale temple to the arts of opera and ballet.
Interestingly, the most magical rooms for me were the little circular Salons de la Lune and du Soleil (sun and moon rooms), where stars fall down from the ceiling and you feel like you're in the portal to an enchanted world.
Apollo turned up again as patron of the arts in the Louvre, and the Galerie d'Apollon (Apollo Gallery).  Again, this room celebrates artists of many types, as well as famous patrons, but it's also very gold - looking forward to my third Apollo, the symbol of a man whose portrait graces the Galerie d'Apollon, as it does so many other places.  The Sun King, Louis XIV.
Apollo is all over Versailles.  As is gold.  From the gilded gates to the overwhelmingly golden state bedchamber, Louis invokes the sun god to represent his own power and prestige.  It's no exaggeration to say that every night in Paris, I went to sleep with images of classical gods before my eyes.  And Apollo probably featured more than most.
But what of Diana?  I have to say that, by the time I left Paris, I was convinced she was stalking me!  (Which, as goddess of hunting, she may well have been).  Among the classical statues of the Louvre, there she was.  At first, I was quite thrilled to recognise this famous statue.  But, when I went upstairs, there she was again!  The exact same statue in 17th- century bronze.  And then in the Hall of Mirrors at Versailles, there she was again!  The third identical Diana!  I don't know how many copies of this statue exist, but three in two days seemed rather much.  Interestingly, the original furniture of the Hall of Mirrors was not gold, but silver.  This goes so much better with my fantasies of this room, and makes it seem like, in the midst of Apollo's realm, the Hall of Mirrors might belong to chaste Diana after all.
I went to Paris with the hope of immersing myself in a baroque fantasy, and now I certainly appreciate better than ever before the huge significance of the classical gods to the upper classes of the 17th and 18th centuries.  But I will leave you with a more modern image.  I had forgotten until my coach driver pointed it out that Paris was where the late Princess Diana left this life.  The spot is marked with a golden flame.  Apollo and Diana unite once more. 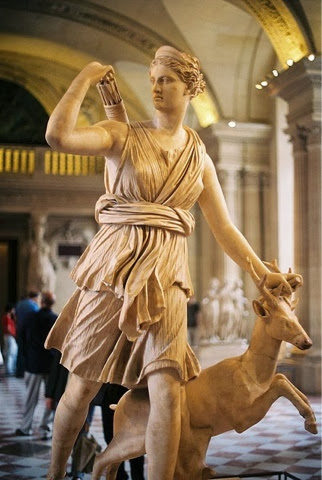