As Asexual Myths & Tales comes out this week, I would like to return to one of the most controversial stories from Asexual Fairy Tales, “Zellandine and Troylus”.

The reaction of some readers to this story almost caused me to abandon writing the second volume of tales. Opinions were raised about the "lack of consent" in the story and how offensive it was. (Yes, yes, I know. Never read your own reviews). Be assured, I take this kind of thing very seriously. I've tried very hard to put trigger warnings into Myths & Tales. And there is also a story - "The True Love Knot" which could be considered the antithesis of "Zellandine". I won't give any spoilers here.

As I wrote in Asexual Fairy Tales:

“Zellandine and Troylus” is one of the earliest known versions of “Sleeping Beauty” and comes from the medieval French romance Perceforest (c.1330-44). It also has echoes of “Rapunzel”, as the maiden is kept in a tower that can only be accessed by a high window. Many commentators find the tale deeply problematic because of its apparent portrayal of non-consensual sex.

The “offending” passage - as I retell it - goes like this:

The curtains of the bed softly stirred, and a voice whispered in Troylus’ ear:

“Are you really such a fool as those at Zellande believed you to be? Follow your desire. The lady dreams of becoming a wife and mother. Give her the gift she longs for.”

“In her sleep?” He said, aghast. “Without her permission?”

“She gives her permission, trust me,” said Venus. “Now, do as you are bidden.”

In truth, Troylus would have been hard pressed to resist, for the flames of desire had arisen in him. He took off his clothes and got under the covers, where Zellandine lay completely unclothed, white and tender. Troylus was overcome with love and happiness. If only Zellandine could have spoken or responded in some way, his joy would have been even greater. As gently as his ardour would allow, he caressed her until at last he planted his seed in her. At that, she gave a heavy sigh, and Troylus felt she knew what they had done. He lay back on the bed and drifted in and out of sleep, until he heard a whirr of wings at the window.

To me, this is a deeply symbolic story about the wish to be absent during sex and childbirth. Not a tale about some sort of sleep rape. I had already mentioned in my retelling that Zellandine wanted to marry Troylus and have his babies. I also mentioned in a previous blog - Sleeping Beauty and Surgery - the connection I personally felt between this story and my experience of undergoing gynaecological surgery under anaesthetic.

It could also be a story about spiritual ecstasy and communion with the divine.

As I wrote in my article for Folklore Thursday, Prison or Prophecy: The Woman in the Tower

Troylus... flies through the window of her tower on the back of a godlike man-bird. Interestingly, we are told this is the Window of the Gods through which no mortal can enter. So, Zellandine’s family initially assume her lover is the god Mars. Although this is not the case, the gods have clearly had a hand in their union and in Zellandine’s subsequent pregnancy.

We are approaching the point where fairy tale crosses into myth. The image of the bird-man hints at something shamanic. When our tales begin to speak of gods, fate and prophecies of vengeance, then we are looking at much older, deeper, elemental meanings.

There is a whole tradition of stories in which a miraculous child of the prophecy is conceived in a tower by the intervention of the gods. Or by the gods themselves. For, this trope is also related to tales of parthenogenesis and virgin births. (And you know how much I love those!) Read the article if you want to learn more. 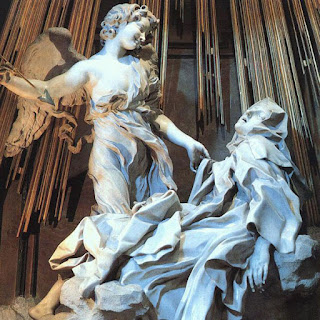 Which brings me nicely to the story of St Teresa of Avila, a 16th century mystic who is famous for her experience of "transverberation": being pierced through the heart by an angelic spear while in a state of spiritual ecstasy.

I saw in his hand a long spear of gold, and at the iron's point there seemed to be a little fire. He appeared to me to be thrusting it at times into my heart, and to pierce my very entrails; when he drew it out, he seemed to draw them out also, and to leave me all on fire with a great love of God. The pain was so great, that it made me moan; and yet so surpassing was the sweetness of this excessive pain, that I could not wish to be rid of it. The soul is satisfied now with nothing less than God. The pain is not bodily, but spiritual; though the body has its share in it. It is a caressing of love so sweet which now takes place between the soul and God, that I pray God of His goodness to make him experience it who may think that I am lying.[3]

In The Anatomical Venus (2016), Joanna Ebenstein writes, "The account reads as extremely suggestive to those outside the faith, but there is no indication that the young Teresa's diary was conisdered impure..." She reminds us that the word "ecstasy" means "an escape from stasis" and that, "Perhaps the heart of the confusion lies in the notion of the ecstatic as either religious or sexual, sacred or profane, where once it was understood to be both." All kinds of ecstatic release cause us to loose our sense of individuality and become one with a greater whole. This is the experience of mystics across all religions, and of many ordinary people as well.

It might seem strange that, as an asexual, I am arguing that sex is spiritual. Although my asexuality probably contributes to my desire for people to see and portray sex as a beautiful, spiritual act, rather than just "humping".

For me, that will never be my experience, but I have definitely experienced ecstasy many times - while listening to music, dancing, watching a film etc.

I guess what I'm saying is, if sex can be spiritual, it can also symbolise something spiritual. Going back to Zellandine, she wants to have a spiritual union with Troylus. She wants to be his wife and have his babies, even if she doesn't want to feel the process that makes it happen. For me, it's the ulitimate wish-fulfulment; having your cake and eating it.

And it also points to something deeper and more mythic. A longing for the ecstasy of union with the divine and the cosmos. That blissful sense of losing yourself, caught up in the moment, feeling, "I could die now and be happy." And that's not something that's limited to people who enjoy sex. It's for everyone.