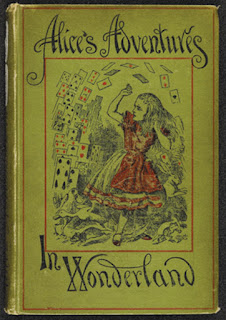 Recently, I listened to a radio documentary called Two Thousand Years of Puzzling, tracing the history of the puzzle, from mazes to crosswords and everything in between. It mentioned Charles Lutwidge Dodgson - aka Lewis Carroll - author of the Alice books. Dodgson was a lecturer in mathematics at Christ Church College, Oxford, and loved a good mathematical puzzle. In fact, he seemed to love puzzles of every kind. Just thinking about Alice in Wonderland and Through the Looking Glass, I was struck by how many different types of puzzle feature in them. Here are some I noticed:

Those are just some that I have spotted. Can you think of any more?