Henry III and the Fairies 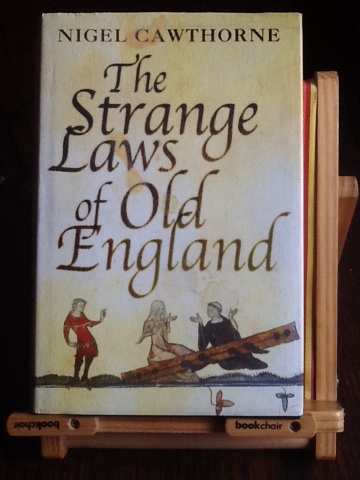 I recently picked up a second-hand copy of Nigel Cawthorne's The Strange Laws of Old England.  As a source for story ideas, this is a brilliant resource, full of all sorts of strange legal goings-on, not just in Old England, but also in Wales, Scotland, the Isle of Man etc.
One thing that caught my attention as a fantasist was a short paragraph saying about Henry III - the king responsible for the re-issued version of Magna Carta I was fortunate to see myself this year in Lincoln.  (There is more than one copy, in case you are about to protest that it is somewhere else!)  The book says that Henry signed a law making it a capital offence to kill, wound or maim a fairy.
This sounds almost as if Henry III was making the fairy a protected species, as we would do nowadays with endangered animals.  However, although Henry III had a menagerie, I doubt the fairy was considered an endangered species in the 13th century.  In fact, as a super-pious king, and one who passed the Statute of Jewry in 1253, which attempted to segregate Jews and enforce the wearing of Jewish badges (Yes, very Christlike, Henry, I don't think) I would have thought it more likely he would want fairies dead.  Or did he want them all corralled and badged up too, where he could see them?  Not very likely to happen, from what we know of fairy folklore.  Perhaps he was scared of them, and feared retaliation from their kindred in the Other Realms?  And then there is the question: what incident could have occurred, to bring such a law into existence??
Is the story even true?  Elsewhere on the Internet (bizzarrevictoria.livejournal.com) another blogger claims that this was just a joke made up by American satirist Ambrose Bierce for his 1906 book The Devil's Dictionary. However, just because it appears under fairy in Bierce's comic definitions, this doesn't necessarily mean he made the whole story up.  Prove it to me!  (I mean there must be someone out there who would like nothing better than to read through a load of 13th century legal documents!) ☺️
Another website (books.google.co.uk) brought up an extract from The Fairies in Tradition and Literature  by Katharine Mary Briggs, which recounts the tale of a magical white hind - a fairy hind - that appeared in Henry III's time and was given chase by the Lord of Kilmersdon before she vanished.  Does the "Fairy Law" - whether it exists or not - have some connection with deer hunting and forestry laws?  We know that Henry signed a Forestry Charter.  (I've seen it!)  It is possible that barons fearful of the fairies wanted to stop anyone from killing a white deer (or any other animal that seemed particularly mystical). Or it could just have been that the king wanted to preserve his hunting rights, and this seemed a good way to do it.
Whatever the truth of the matter, you can't deny that there's a fine fantasy story waiting to emerge from this.  I'd better get writing!
Fairies folklore Henry III Magna Carta strange laws white deer
Location: Clayton Clayton