Ladies, Gentlemen and a League of Liars 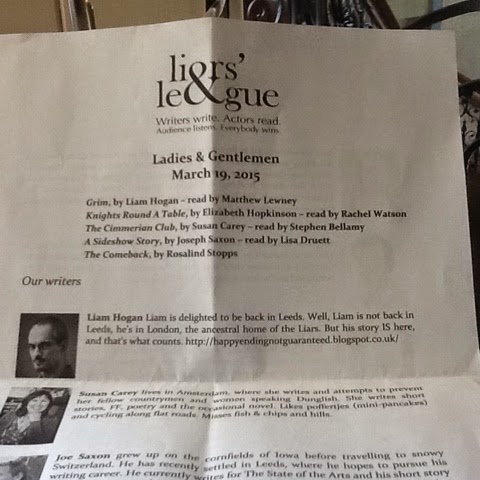 Last night, I had my first experience of Liars' League Leeds.  Until a few weeks ago, I had never even heard of it.  In fact, when I first read the call-out for stories, I thought it sounded like a Yorkshire Locke Lamora!
It turns out there are Liars' Leagues in Leeds, London and New York- at least.  The premise is simple.  Writers write.  Actors read.  Audience listens.  Everybody wins.  Every month or two, the Liars' League gives a call-out for stories on a particular theme.  Five or so are chosen.  They are then read out by actors on the night.  It's like being on the radio.  Only live.
The theme for this particular night was "Ladies and Gentlemen".  The stories chosen were nicely varied, and covered a variety of settings and moods.  It was interesting how many of the other writers had taken the typical showman's announcement as a starting point.  (That approach to the theme hadn't even occurred to me).  There was the moving tale of a conjoined twin, performing with her sister on Coney Island.  A stand-up gig that turned out to be absolute hell.  Literally.  A ghost story told by a man seeking entry to a Victorian gentlemen's club.  And the account of a failed actress-turned-carer and her relationship with one of her clients.
My story was "Knights Round a Table," a comic tale about a woman who invites five of her crushes from the pages of literature to dinner.  I wrote this story quite some time ago, and always knew it deserved a home, but never found one until now.  It was read on the night by Rachel Watson, who has worked in theatre and storytelling.  I found the whole process of being involved a lot of fun.  The story was edited, as it might be for radio, and I think they managed to make it even funnier!  It was great, hearing my story being read by someone who wasn't me.  It meant I got to enjoy all the satisfaction of doing a reading with none of the work!  Being live, it also meant I could meet and shake hands with the actor who performed my story.
May I just add that the venue, The Crowd of Favours, was very pleasant and easy to find.  I had a thoroughly enjoyable evening (without the need to slay any dragons - that's a joke about my story!) and I would definitely like to do it all again.
actors Leeds Liars' League live events writers
Location: Waterstones Bradford Wool Exchange The Wool Exchange, Hustlergate, Bradford