Cards on the Table... 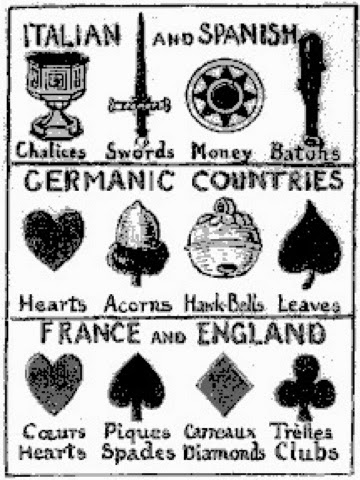 This week, when working on my current work-in-progress, I decided that my characters should be playing a game of cards.  I eventually decided on scopa, an Italian game with a long history.  I downloaded an app so I could learn how to play - and have some idea what I was writing about!  It is a fun game, which involves capturing cards with other cards of the same value.  You can score extra points by clearing the table and by possessing certain special cards.
What makes it especially fun for me is that it is played with a different set of cards from the one I am used to.  Before I started researching this week, I didn't know that different European countries have their own traditional packs of cards.  Traditional Italian cards are divided into cups, swords, coins and clubs (batons), the numbers go up to seven, and the three picture cards are all male.  Traditional German cards are divided into hearts, acorns, bells and leaves.  (I love that one!)
Readers of different backgrounds to me are probably now going: "How could you not know that?"  "I used to play scopa with my nonna" etc.  But I didn't know.  I was aware of Asian playing cards because I once went to see an exhibition of Ganjifa cards from the Indian sub-continent, which are round, and have their own symbols and pictures.  But I didn't know about variations on my own continent.  Seeing the cups, swords, cups and batons in the Italian cards, now explains to me their presence in the (tarot) cards of Marseilles, which were originally used for playing a game.
I've always enjoyed the symbolism of playing cards, and the storytelling possibilities within them, so discovering new (to me) suits of cards is fun.  For religious reasons, I steer clear of the fortune-telling aspect, but I love the variety of artwork that has gone into them over the centuries and the resemblance to heraldry.  The four suits (of whatever kind) have been taken at times to symbolise the four seasons, four elements, four compass points and four estates of man (clergy, nobility, merchants/artisans and peasants).  But the great thing about them is, they can mean whatever you want them to.  They could be a secret language.  They could come to life as real characters, like in Alice in Wonderland or Jostein Gaarder's The Solitaire Mystery.  They could be the start of a whole new story.
Or they could be something for my characters to play with in the story I'm already writing.
Italian Playing cards symbols traditional
Location: Clayton Clayton