She Stoops to Conquer - with leopard breeches 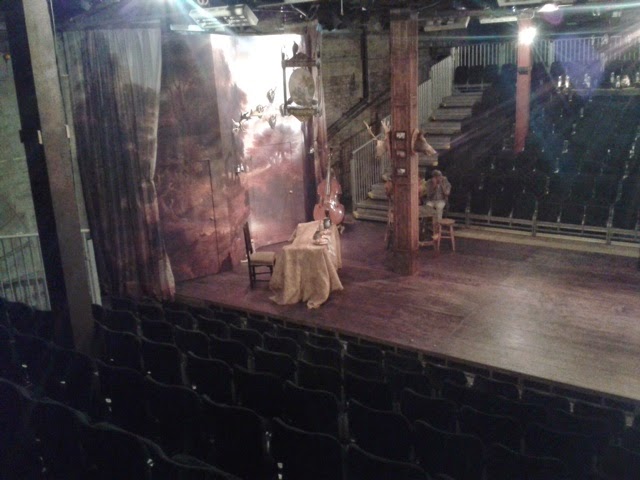 Last night, as my wedding anniversary date, I went to see Northern Broadsides' production of She Stoops to Conquer at the Viaduct Theatre, Halifax, West Yorkshire.  I had never been to this theatre before; it is built under the arches of an actual old viaduct, a great place to watch historical plays.  As you can see from the photos we were allowed to take before the play, the audience sit on two sides of the stage.  Along with the wonderful scenery, this made it feel like sitting in an old inn yard theatre, which is especially good because the main plot of She Stoops to Conquer centres around the local squire's house being mistaken for an inn.
The play was one of the most enjoyable I have ever seen.  She Stoops to Conquer is a very funny play, full of disguises, mistaken identity and - ultimately - true love.  I know I had to read it at school once, but I didn't remember anything until it got to the part where the carriage is stuck in the horse pond. (Why did that stick in my memory?)  The actors were excellent, and the performance was delivered with roistering, 18th century liveliness.  As well as speaking their lines, the cast sang, danced and played musical instruments (including violin, cello, flute, piano, guitar and trumpet).  The music covered the full range of 18th century tunes, from country dances to drinking songs to opera, including a very funny rendition of the Papageno/Papagena song from Mozart's Magic Flute.
And so to the leopard breeches.  All the costumes were wonderful.  (Mrs Hardcastle's wig deserved a Hogarth engraving of its own).  But it was the costume for Tony Lumpkin, the prank-playing brother, that caught my eye on the poster before the play had even begun.  The costume designer, Jessica Worrall, had chosen to kit him out in leopard print waistcoat and breeches.  Some audience members might have thought this was simply Ms Worrall doing what she stated in the programme, "using references from noted eighteenth-century satirical cartoonists such as Gillray and Rowlandson and then giving them a modern edge with the use of some contemporary colours and fabrics".  But I remember well the Two Nerdy History Girls (whose blog is linked in the side panel) posting picture after picture of 18th century dandies sporting leopard breeches.  It was real!  And what a joy it was to see it in the flesh.  (Fur?)
She Stoops to Conquer was a brilliant night out.  I got to welcome my husband into the 18th century world I inhabit every day.  And, as I remarked, our own courtship was only fractionally less complicated than the one in the play! 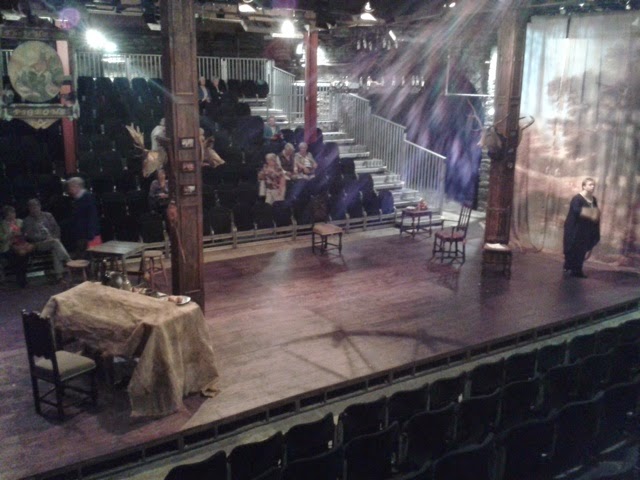