It's time for Evelina! 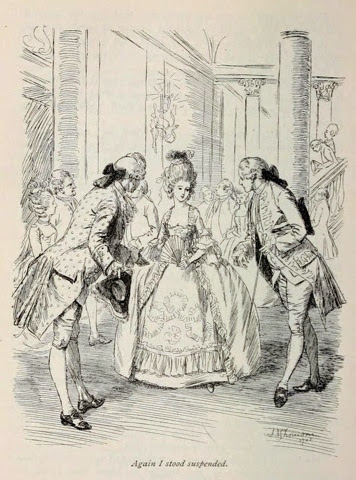 It's that time of year (in Britain, anyway) when, as the nights start to draw in, drama makes a welcome return to our TV screens, especially costume drama.  Within the last week, we have had The Village (1920s), The Suspicions of Mr Whicher (Victorian), Houdini (late C19th-early C20th), Our Zoo (1930s), and Cilla (1960s), and Sunday sees the return of the all-conquering Downton Abbey.
Many costume dramas are based on books.  I am still anticipating (with equal amounts of excitement and dread) the promised adaptation of my favourite historical fantasy of all time, Jonathan Strange & Mr Norrell.  I would venture to suggest that the two most adapted authors are Charles Dickens and Jane Austen.  Dickens, of course, was prolific.  He wrote 15 novels, plus novellas and short stories.  Jane Austen only wrote six completed, adult novels (there are examples of unfinished novels and juvenilia).  But this doesn't seem to prevent more and more Austen adaptations coming out each year, including spin-offs like Becoming Jane, Lost in Austen and Death Comes to Pemberley.  People love Jane Austen.  They love the idea of passions burning away behind restrained manners and social convention.  They love a hero like Mr Darcy, a gentleman in every sense of the word, who acts with honour and discretion, and ultimately whisks you away to live in a stately home.
Given our love of the Austen style of storytelling, it amazes me that no one has thought to dramatise the works of her forerunner, Fanny Burney, and in particular Burney's wonderful first novel, Evelina.  I first came across Evelina as a university set text, and every time I read it, I become just as emotionally swept up in it as I was the time before.  To me, Fanny Burney is, "Jane Austen before Jane Austen".  She was undoubtedly an influence on the young Jane.  Evelina contains many of the same themes and motifs as Pride and Prejudice or Sense and Sensibility: class snobbishness, navigating a complex world of etiquette, emotionally charged moments at balls, embarrassing relatives, a seductive suitor (called Willoughby!) and a gallant and sensible hero, the lovely Lord Orville.  But it has a bit more action in it than Jane Austen typically puts in her novels.  Who could read Evelina and ever forget the fake highway robbery, the attempted suicide, or indeed the bizarre race between two old ladies?
First published in 1778, Evelina is an epistolary novel (ie written in the form of letters between the characters) told mainly from the viewpoint of 16-year-old Evelina Anville.  Evelina has been disowned by her aristocratic father and brought up in the countryside by a vicar, but now she must enter the world of fashionable society where, not really fitting properly into any social class, she is dragged hither and thither by groups of friends and relations, while being amorously pursued by a variety of men.  I really feel for Evelina.  Like me - and like many teenagers - she is shy and awkward in social situations. She wants to do the right thing, but struggles to decide what that might be, often inadvertently pushing away her real friends, particularly the long-suffering Lord Orville.  At her first ball, she first goes into fits of giggles over the foppish behaviour of Mr Lovel, then completely clams up at every attempt Lord Orville makes to start a conversation with her.  Sometimes, the sheer complexity of etiquette - and her shame at her own mistakes - reduces her to tears.  (I know exactly how she feels there; the same thing happened to me on my visit to Japan).  And yet she can be brave too, rescuing the depressed Mr Macartney from suicide, and finally facing up to her estranged father.
Lord Orville is one of my fictitious crushes.  Many of the aristocratic men Evelina encounters are driven more by lust than by love.  In 18th century society, a girl with "no family" is unlikely to be considered as a serious marriage prospect by the upper class, although she may be highly desirable as a mistress.  The business class men Evelina meets can be brash and take liberties with her.  Lord Orville rises above all this.  He is polite, caring, intelligent, has a sense of humour, and looks good on the dance floor.  But most of all, he's so sweet!  He really loves Evelina.  He says things like, "I am very sorry... that I have been so unfortunate as to distress you" (1).  He rushes to her lodgings to make sure she is all right after she has been coerced into a carriage with Sir Clement Willoughby.  He gets angry when he finds out his sister and friends have been treating Evelina with contempt.  I feel for him just as much as I do for Evelina when he can't understand why she keeps avoiding him, but doesn't want to ask her impertinent questions.  I'm sure a screen kiss between him and Evelina in the wedding carriage would be just as satisfying as the one between Elizabeth and Darcy in 1995.
I do feel a bit worried that anyone who wanted to adapt Evelina for the screen might want to change the characters of Evelina and Lord Orville, to make them more outgoing or more "modern".  But not enough to take back my opinion that it's way past time we had an on-screen Evelina.  Not everyone can cope with a 448-page 18th century epistolary novel.  But people across the world love to watch dramas in period settings, especially ones with a good love story.  So come on, Andrew Davies, Julian Fellowes and all you kings and queens of costume drama!  It's time for Evelina!
(1).  Burney, Fanny, Evelina (1778) (Chalford: Nonsuch Publishing, 2007) p.330
Picture: illustration for Evelina by Hugh Thomson via Pinterest
18th century Costume drama Downton Abbey Jane Austen period drama
Location: Clayton Clayton