A Feast of Fools 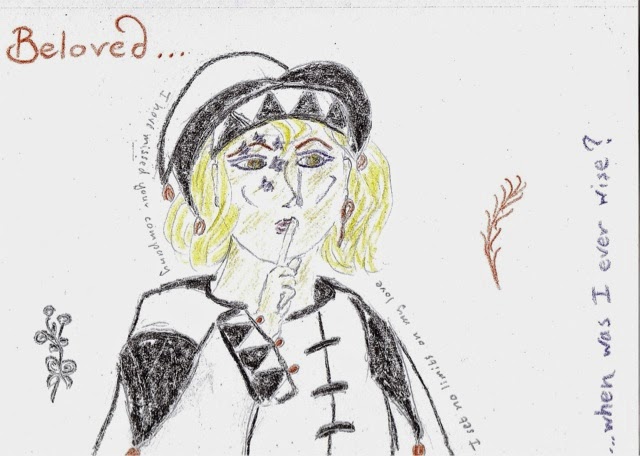 As I write this, there are only 15 days to go until the UK publication of Fool's Assassin by Robin Hobb.  I am a huge fan of the Farseer/Tawny Man trilogies, and especially of the Fool.  I was devasted by how his story was left hanging at the end of Fool's Fate, and am very excited (and somewhat nervous) to see how things will progress in the Fitz and the Fool trilogy.

Robin Hobb's Fool is one of the all-time great fantasy characters.  However much we get to know him, he will always remain a mystery.  (Is he even truly a he, for a start?)  A self-confessed coward yet courageous, affectionate yet capable of inflicting deep hurt, learned yet a fool, he shifts gender, changes colour and is impossible to pin down.  His love for Fitz is heartbreakingly touching, and his androgyny and insistence that love doesn't require sex make him, for me, one of the great asexual icons.

The Fool has influenced me professionally as well as personally.  It is safe to say that Tammo and Carlo in my current project, the Angelio Trilogy, would not exist were it not for Fitz and the Fool.  My Fitz/Fool influenced song, Beloved, is linked at the bottom of this blog.  And the drawing of the Fool at the head of this page is - again - one of mine.

Of course, the figure of the fool or jester is not exclusive to Robin Hobb.  He has been with us through many centuries, appearing in many guises.  So, while we await the Fool's reappearance, let us take a look of some of my other favourite fools from page and stage:

1.  Wamba son of Witless from Ivanhoe by Sir Walter Scott

Jester to Cedric the Saxon and "playmate" to Gurth the swineherd, Wamba has always struck me as one of the most loveable characters in Ivanhoe.  A fool in the traditional mode, he makes great play of his supposed stupidity, while exercising great wit and sharpness.  His role gives him licence to insult the great and powerful (including all the plot's villains) which he frequently does.  And yet he is never cynical.  There is innocence and playfulness in all he does.  Loyal, brave and big-hearted, Wamba the fool is probably the most sensible person in the book.

2.  The Joker from The Solitaire Mystery by Jostein Gaarder
Less loveable but deeply intriguing is the Joker, "who sees too deeply and too much."  He is an actual joker from a pack of cards become a "dwarf with cold hands."  In a story where character and incident reflect each other like a maze of mirrors, the Joker could be a type of Hans Thomas' father, the amateur philosopher who sees himself as the joker in the pack.  But he is also the catalyst for Hans Thomas' discoveries, and a rebel, whose realisation that he is created from someone's imagination threatens to destroy his whole world.

3.  The Fool from King Lear by William Shakespeare
I hated being made to study King Lear at school, but I never forgot the Fool.  I expect he is the prototype of many of the later fools - pretending to be stupid while making witty comments, and loyal to his deposed king when all others abandon him.  No one who has seen King Lear can forget the (seemingly neverending) storm scene in which Edgar, who is pretending to be mad, and the Fool, who acts mad professionally, keep up their acts while attempting to care for genuinely mad King Lear.  It always makes me very sad when King Lear says, "And my poor fool is hanged."

4.  Patchface from A Song of Ice and Fire by George RR Martin
A Game of Thrones and its sequels contain many fools - Ser Dontos, Moon Boy, Butterbumps - but the one who stands out for me is poor, tragic Patchface.  So called because of the motley squares tattooed on his face, Patchface was sent to Westeros as a precocious talent, who could juggle, riddle, do magic and sing in four languages.  But a shipwreck deprived him of his wits, and now all he does is sing cryptic fragments ending in, "I know, I know, oh, oh, oh."  I can't help thinking that Patchface really does know something that other people don't, and that a second accident might restore his wits and enable us to find out what it is.

5.  The Little Spirit from Lord of the Dance by Michael Flatley
This could be a cheat because it was only in the 2010 reunion tour that The Little Spirit was dressed like a jester.  But her innocence and flute playing make her, for me, another type of the traditional fool. I was inspired by a combination of The Little Spirit and Robin Hobb's Fool to create The Little Fool in my interactive story, Within the Rain Palace.  Read it here.

Here is my Fool-inspired song, Beloved: