September 13, 2013
I recently read a Top Ten of short stories from The Guardian, and I hadn't read any of them!  So I thought I would post a list of short stories that made a lasting impression on me.  They're all fantasy stories, and 7 is a magic number, so it seemed to fit together well. 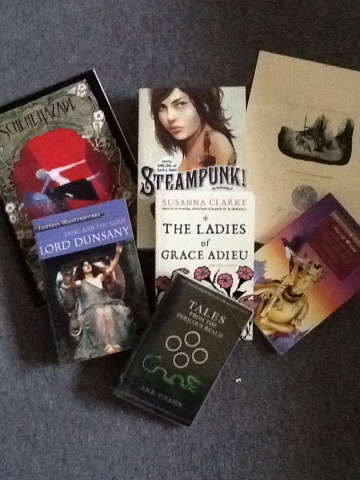 Smith of Wootten Major by JRR Tolkien
From Tales from the Perilous Realm
On a completely different scale from the epic Lord of the Rings, but with the same heart, this is a beautiful story about a boy who swallows a star which enables him to walk in the land of Faery as an adult.  For anyone who has ever felt, like me, that "I'm walking in the wrong land.  My generation doesn't understand".
The Kith of the Elf-Folk by Lord Dunsany
From Time and the Gods (Fantasy Masterworks)
It's very hard to choose just one story by "the master", Lord Dunsany, but this one really does linger. The little Wild Thing of the marshes wishes for a soul when she hears singing in the cathedral, so her people help her to craft one.  But a soul that longs for beauty in an ugly world is a painful thing...
A Tale of the Meadow Beyond by Sylvia V Linsteadt
Gray Fox Epistles, July 8th 2013
Of all Sylvia Linsteadt's beautiful Gray Fox Epistles so far, this one self-consciously evokes Lord Dunsany and his, "beyond the fields we know."  Based on the Estonian  A Tale of Tontlawald, it is a mysterious tale, in which a girl wanders into a meadow inhabited by strange, patchwork people, a black jaguar and a house no one lives in.  And she doesn't want to leave.
Tom Brightwind or How the Fairy Bridge was Built at Thorseby by Susanna Clarke
From The Ladies of Grace Adieu and other stories
Again, it's very hard to choose just one story from Susanna Clarke's collection, which takes us back into the world-view of Jonathan Strange & Mr Norrell.  But I particularly like this one about an 18th-century Jewish physician who is cursed with the friendship of one of Clarke's narcissistic and opinionated fairies, who decides to accompany him on his rounds.  It manages to be charming, magical and funny all at once.
Everything Amiable and Obliging by Holly Black
From Steampunk!
This is a steampunk love story, in which a romance develops between a girl and an automaton dancing master, who is plugged into the house and connected to all other automata within it.  Told from the perspective of her cousin Sofie - who is repressing her own romantic feelings towards Amelia's brother - it is a tender and moving tale that questions individuality, love and free will.
True Thorn by Paul Blake
From Scheherazade #26
I loved subscribing to Scheherazade while it ran, and this story made a big impression on me, maybe as much for the beautiful illustrations as for the story itself.  But it also stuck with me because it was the first story I read in which the usual conventions of fairy tale are made so ambiguous. The sorceress is the Sleeping Beauty, the torturer and the abandoned lover.  The prince is a naked slave who goes back for more.  Reading this influenced my writing for a long time.
The Fisherman and His Soul by Oscar Wilde
From The Happy Prince and other stories
This story made a particularly big impression on me because I saw it as a play first and read it afterwards.  The fisherman sends away his soul so that he can share love with a mermaid.  But the soul makes journeys of its own, and every year it returns to try and tempt the fisherman to abandon love and take it back.  Extremely haunting.
Have you read any of these stories?  What do you think of them?
fairy tale fantasy Lord Dunsany Oscar Wilde Short stories steampunk Tolkien