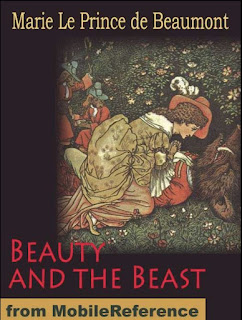 This is the classic version on which most modern retellings are based. (I have it as an e-book). Although here, Beauty is one of six children (three brothers and three sisters) and no particular reason is given as to why the Beast was enchanted. The rest is much as we’ve come to expect: the impoverished merchant, the request for a rose, the sumptuous palace, the magic ring etc. 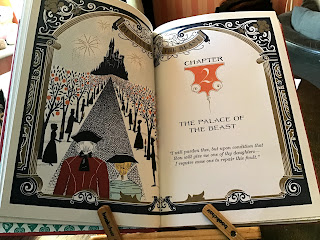 This is actually the older version. It is much longer and more detailed, with a lot of backstory about the enchanted Prince and the world of the Fairies. Interestingly, in this version, Beauty has a recurring dream about a young man “beautiful as Cupid” (a reference to the tale’s origins in the myth of Cupid & Psyche), who is of course the Beast in his true form. She falls in love with this vision, so is not disappointed when the Beast transforms. It is revealed that he was made a Beast because he and his mother refused an old Fairy’s proposal of marriage to him. There is also a convoluted backstory that reveals Beauty has noble blood after all. This part might not matter so much to us nowadays, but it does get over the problem of difference in rank that would have been a big obstacle to marriage in the 17th century. 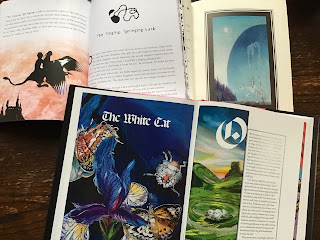 The Norse version of the tale, in which a girl is carried from her home by a great, white bear, who transforms into a young man at night. As in the Cupid & Psyche myth, the girl wrecks everything when she peeps at her husband by candlelight. She must then make the journey to the castle east of the sun and west of the moon to prevent her husband being married off to a troll.

The version found in Grimm’s Fairy Tales. Here, the Beauty figure wishes for a singing, springing lark (not a rose) and the Beast and all his servants are lions. Light must not fall on him or he will be transformed to a dove to roam for seven years. Of course, this happens accidentally when he accompanied Beauty to her sister’s wedding in a blacked-out carriage. She must then seek him and prevent his marriage to a false bride, as in the previous story.

In case you thought that in the classic tales, only men get transformed, I present to you Madame D’Aulnoy’s The White Cat. A Prince on a quest for the cutest dog (I kid you not!) comes upon an enchanted castle whose Princess and servants are all cats. (Not quite so scary as lions!) There he his treated very much as Beauty is in the Beast’s castle, until he remembers his quest. The White Cat helps him to fulfil this and a subsequent quest to find the finest cloth. But when the final quest to win the crown is to present the most beautiful wife, the Cat tells the Prince he must cut off her head and tail and throw them in the fire. At this, she is disenchanted. 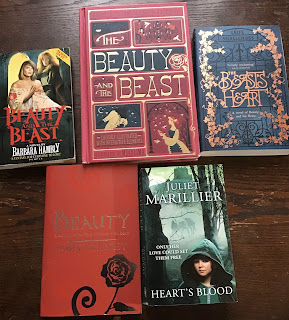 This novel from 1978 pretty much has classic status itself. It’s told from Beauty’s point of view, and has quite a lot about her family, before the Beast comes on the scene. It’s notable that “Beauty” here is an ironic nickname. The awkward third daughter does not become beautiful until she grows up and finds love. The gradual falling-in-love in this book is exquisite. And who could forget the Beast’s library, that contains all the books that have been or will ever be published?

2. The Beast’s Heart by Leife Shallcross

This was the winner of Hodderscape’s Open Window, and tells the tale from the Beast’s perspective. We really feel his pain and struggle as he gradually falls in love with Isabeau. This novel takes a lot of motifs from the classic versions (the Fairy enacting a family curse, Isabeau going home for her sister’s wedding). It also makes use of the magic mirror as a way for the Beast to see into the outside world.

3. Beauty and the Beast by Barbara Hambly

A novelisation of the 1980s TV series, which I discuss here. Tormented, romantic man-beast Vincent resucues lawyer Catherine from the mean streets of New York and brings her to the Tunnels, a magical, alternative community beneath the city streets.

The story transplanted to early medieval Ireland. Young scribe Caitrin stumbles into the cursed fortress of Whistling Tor, fleeing domestic violence. Here, the “Beast” is the young chieftain Anluan, bad-tempered and depressed by the curse that fills his household with ghosts, and with his physical deformities. Caitrin must scour a library of jumbled records to find the answer that will set them all free. 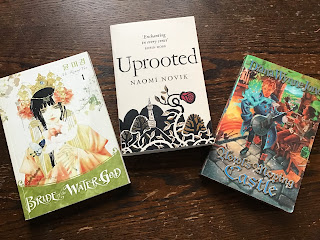 Similar to Beauty and the Beast

There are many aspects of this magical children’s classic that mirror Beauty & the Beast - and subvert it! Sophie, as the eldest of three sisters, is not expected to have adventures. But she is forced to seek refuge in the chaotically magical Moving Castle of Wizard Howl (who is rumoured to devour girls’ hearts) when the Witch of the Waste enchants her into an old woman. But Howl is under a curse of his own, having bargained his heart to a fire demon. The parallels are even more obvious in the Studio Ghibli film, where Howl is slowly turning into a monster.

This actually made me think of Howl’s Moving Castle when I first read it. A wizard called the Dragon chooses a girl from the village every ten years to serve him in his feared tower, as the price for keeping the villagers safe from the Wood. To her shock, Agnieska is chosen instead of her beautiful friend. I found her relationship with the Dragon and his magic to be very Sophie-and-Howl.

3. Bride of the Water God by Mi-Kyung Yun

In this sumptuous Korean manhwa, Soah is sacrificed to the water god Habaek so her village can have rain. Instead of the monster she expected, Habaek is a spoiled child-god, who can only turn into his true, adult form at night. Because of this, Soah thinks he is two different people. And it’s rumoured that he killed his previous wife! Plus, there are many machinations in the world of the gods that make Soah and Habaek’s path to true love far from easy.

I hope you enjoyed this foray into Beauty and the Beast books. What’s your favourite version?