Witch or Saint? A Fine Line 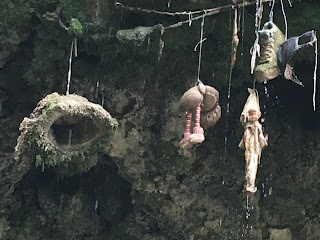 Today, I visited two famous caves in Knaresborough, North Yorkshire: St Robert’s Cave and the much more famous Mother Shipton’s Cave. Both are located by the banks of the River Nidd in the remains of Royal Forest of Knaresborough. Both once housed figures who were considered capable of working (or speaking) wonders. Both spoke truth to power in their day. So why is Ursula Shipton (neé Sontheil) remembered as a witch, while Robert Flower is remembered as a saint? 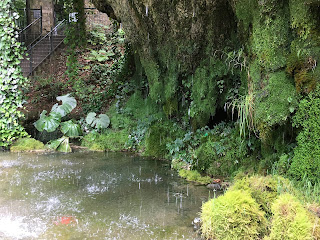 I had been wanting to revisit both caves for some time. And to me, both felt like sacred sites. The cave where Ursula Shipton was allegedly born during a storm, is next to the mystical petrifying or dropping well. Water from a stream pools on top of a cave, then drops into a pool beneath, gradually turning anything in its path to stone. It’s an enchanting spot! 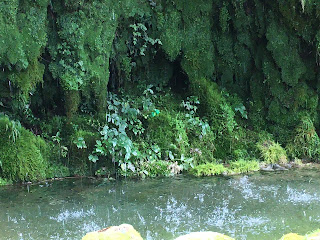 And round the side of that is the entrance to the “wishing well”, a cleft in the rock where the magical water pools, and into which you can dip your hand. This really felt like a sacred well to me. (So, thanks-not-thanks to the person who decided to yell “Don’t touch the water!” in a spooky voice just as I was dipping in my hand in an attitude of prayer!) 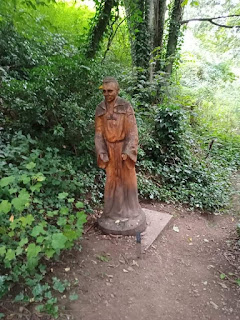 St Robert’s Cave is a less impressive and less patronised site. (Sadly also less well-maintained). It has been used in the C18th to conceal a murder, and more recently to smoke weed (if the smell today is anything to go by!) But it had a lot of harassment in St Robert’s day, too, so that’s nothing new. And sitting outside, in the remains of the chapel that was once there, I was able to meditate and feel a great sense of peace. 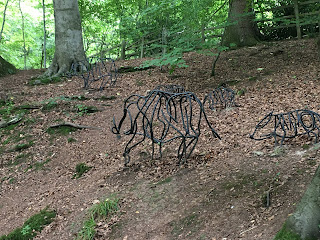 So, why the disparity of reputations? Obviously, they lived in different times. Robert lived through the reigns of Richard the Lionheart, King John and Henry III. He seems to have been a bit of a restless character, who preferred life in a hermitage to communal life in a monastery. (Although he wasn’t completely alone. His chapel-cave was a mini-monastery that farmed the land around and provided for the poor). He was consulted by many people, including King John himself. The story goes that Robert refused to stand for the king, as he was kneeling in prayer. He showed the king an ear of corn and asked if the king was powerful enough to create such a thing. That got him told! He also had numerous run-ins with the Stutevilles, the local lords. But despite this, he was revered as a saint and credited with miracles. 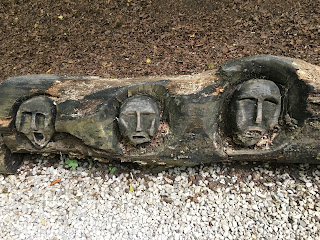 Ursula Shipton lived in the very different times of Henry VIII and his Tudor heirs, a time of religious turmoil, when the very idea of saints swung in and out of favour. Her mother Agatha was 15 and unmarried when she was born. There is a theory that her real father may have been the Abbot of Beverley, who christened her. But people liked to say it was the Devil! She was intelligent and mischievous, and seems to have had a disability or deformity. She was able to play tricks on people, and get the better of those who tormented her. And she stood up to one of the most powerful men in the country, Cardinal Wolsey, whose downfall she predicted when she was visited by no less men than Charles Brandon, Duke of Suffolk (Henry VIII’s great friend), Lord D’arcy and Lord Percy, Earl of Northumberland - when they visited her in disguise. It seems she had much to say about the issues of her times. Could she really predict the future, or could she just see which way the wind was blowing? 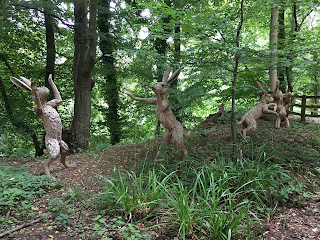 If she had lived in Robert’s day, could she, too, have been a saint? Or were other factors against her? Namely: she was a woman, illegitimate and deformed? It’s interesting that, at the site today, we passed a sculpture of hares, which have traditionally been associated with witches (or with wise women and pagan goddesses). But St Melengell of Wales was a hermit famous for sheltering hares. So, it seems one’s reputation as saint or witch really can rest on a knife-edge. 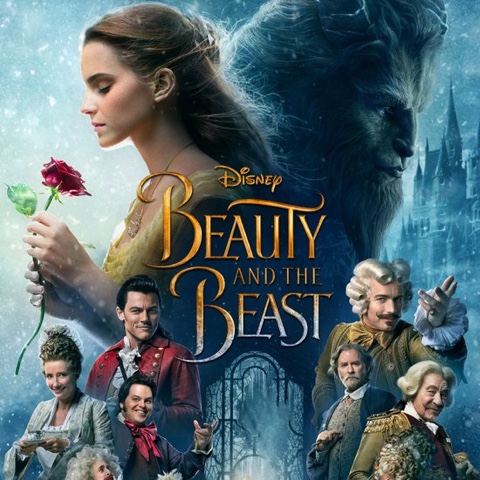