June 15, 2020
The world is going through very tough times at the moment and there's a lot to make us cry, but there are always things that bring us joy in the midst of despair. For me, one of those things has been the successful crowdfunding of Asexual Myths & Tales (the follow-up to last year's Asexual Fairy Tales) right in the middle of Pride Month.
So, what better time to share my top five asexual icons. Just to clarify, I don't mean by this that I necessarily believe all these people and characters are historically/canonically asexual, but that to me they symbolise something about my asexuality; they are somehow poster people for my identity. 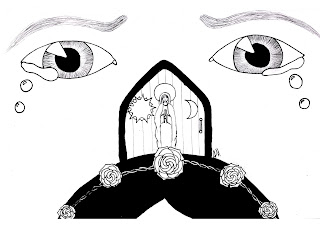 "Pearls and Roses" by Anna Hopkinson
Trust me, as a Christian with both Protestant and Catholic friends and relations, I've heard all the arguments back and forth about whether Mary really was a lifelong virgin. To me, it matters less from a theological point of view than it does from a personal viewpoint. The words, "Virgin ever, after as before," from Alma Redemptoris Mater gave me great comfort at a time when I was struggling to reconcile being an asexual wife and mother. I have always identified with Mary from a young age - which perhaps should have been an early clue to my identity! 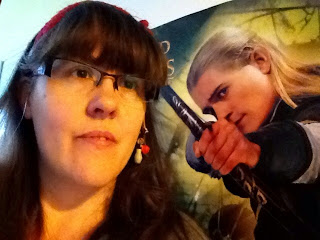 "It was just me, Legolas and the Virgin Mary." These were the words of frustration I wrote in 2005, after discovering that most virgins were still sexual. Whatever your opinion of the character, the androgynous, sexless figure of Legolas in Peter Jackson's Lord of the Rings film trilogy kickstarted a rebirth in my soul and a journey of self-discovery no less adventurous than the quest of the Ring.

"The Lady of Shalott" by John William Waterhouse. Public domain.
We had this picture on the wall in our English department at school and I was always drawn to it - another early sign. When I read the poem, the eponymous Lady became the figure in literature I most identified with her. She has turned up many times over the years, in my poetry, songs and short stories, notably "The Ice Queen and the Mer-King" in Asexual Fairy Tales. 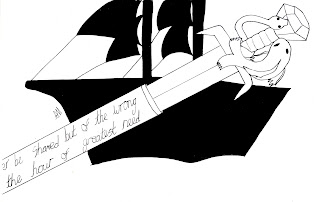 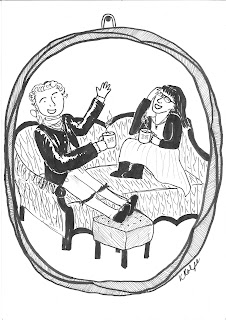 "Elizabeth and Farinelli" by Kirsty Rolfe
All the castrati are asexual icons to me. But Farinelli (Carlo Broschi 1705-1782) is the most famous and seemingly the most well-adjusted. He came from a higher social background than most of the boys who were castrated at a young age to preserve their soprano voices and sent to train in rigorous conservatoires. Perhaps the fact that his journey was less rags-to-riches than most (although as a top-billed singer he commanded huge fees) helped preserve him from the rock star behaviour of some of his contemporaries. I do find it likely that he was in fact asexual. I have been working on a novel project about the castrati for many years; and I was delighted to find Farinelli as a character in "The Rose of the Alhambra", a tale I have retold in Asexual Myths & Tales.
aexuality androgyny asexual Carlo Broschi castrati castrato Farinelli identity Lady of Shalott Legolas LGBTQIA fiction Lord of the Rings Platonic love Sir Galahad Virgin Mary