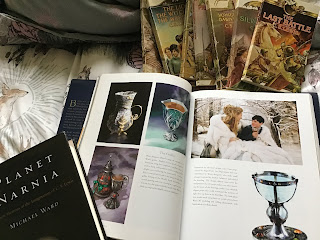 Authors generally have a way of talking about Narnia. I’ve noticed it at the various literature festivals I’ve been to and in articles I’ve read online. It goes something like this. “When I was a kid, I read The Lion, the Witch and the Wardrobe and fell in love with it. Then, at the age of 13/18/32, I noticed all the Christian symbolism and felt betrayed. I’ve never enjoyed it in the same way since.”

Whenever I hear/read this, it’s like a stab to the heart. I want to get a word in. Because my experience of Narnia is the complete reverse.

I first heard the story of The Lion, the Witch and the Wardrobe as told over several school playtimes by my best friend, the son of a local nonconformist minister. I went on to become completely obsessed by the whole series, reading the books over and over again. Now, I don’t know if my friend or his parents told me, or I just worked it out because I was such a religiously precocious child (I was!) but I can’t remember a time when I didn’t see the Christian symbolism in Narnia. I loved it. I probably read more symbolism into it than the average university professor. Narnia was my handbook for life, second only to the Bible.

Of course, I knew even as a young teenager that this didn’t make Narnia a full-on allegory, in the style of Pilgrim’s Progress (which is basically an über sermon illustration). I remember feeling frustrated with my Mum during a theatre production of The Voyage of the Dawn Treader when she asked me, “But if Aslan is God, why does he allow the Magician?” I knew that in Narnia, the story comes first.

But my moment of shock came as an undergraduate, reading Ovid’s Metamorphoses and realising that the creation of the animals in The Magician’s Nephew (animals erupting out of a bubbling earth) was taken from this pagan classic. “But I thought this was a Christian book!” was my inner cry of dismay. Temporarily, I felt the same sense of betrayal my colleagues did on discovering Narnia is Christian, by discovering Narnia is not Christian.

Looking back, I feel I should have figured this out. I mean, the fauns! The centaurs! The god Bacchus! CS Lewis’s influences come from a variety of religious backgrounds. Not just classical/Norse/Celtic paganism, but the Muslim and pre-Muslim world of 1001 Nights - and I’m not just talking about The Horse and His Boy. Think of the fact that the name Aslan is Turkish for “lion” or that Jadis the White Witch is half-jinn and descends from “your father Adam’s first wife, her they call Lilith.” (1)

Lewis was a medievalist, and what you get in Narnia is a medieval world, in which the Christian, Muslim and pagan mix together in the world of story, and everything is potentially symbolic. And yes, as Michael Ward points out in his book Planet Narnia, (2) Lewis was a secretive man who delighted in hidden meanings. (In that book, Ward argues convincingly that each of the Narnia books has a secret meaning based on one of the medieval “seven planets” - Jupiter, Mars, Sol, Luna, Mercury, Venus, Saturn).

When it came to the pagan creation myth, I got over it! As a writer, I now love Narnia more than I ever did. And yes, I sometimes quote it in sermons. But I know that it’s Christian imagery isn’t the be-all and end-all. Maybe it’s time for some non-Christian readers to get over it, too?