July 15, 2019
Last week, I wrote about a historical discovery I made after a visit to Halifax Minster, final resting place of Anne Lister.


there was a lot of radical, grassroots religion going on in the West Riding in the 18th century, and I ended up going down quite a rabbit hole of research.

One of the places that research led me was to this monograph about the man I believe one of my brothers was named after: 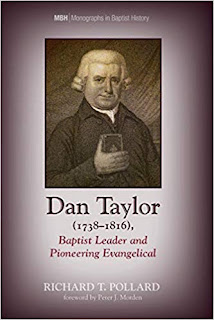 He is sometimes called “The Wesley of the Baptists”, and indeed knew the Wesleys and Whitfield, but ultimately formed his own New Connection of Baptist and Independent Methodist congregations, which eventually became the Baptist Union of Great Britain. It was his inspiring preaching tours that led to the creation of a congregation at Queensbury (then named Queenshead after its local pub, popular on the pack horse route between Bradford and Halifax. This in turned spawned my own spiritual home at Clayton Baptist, now under a decade from celebrating its bicentenary.

Dan Taylor was a Calderdale man - from  Northowram - and began his spiritual life at Halifax Minster (aka Halifax Parish Church). Revd George Legh was his vicar, and in fact had Wesley to preach at the church. Taylor became involved in his local Methodist Society (Methodists were a society to begin with rather than a distinct denomination) and later abandoned the Anglican Church completely, throwing himself into the Evangelical Revival happening in the West Riding at the time.

This was a real grassroots religious movement among ordinary working people. (Taylor was a miner with no formal education). Preachers toured the countryside on horseback, preaching in the open air to crowds too big to be contained by a church. One key venue was the churchyard at Haworth, where the Brontë sisters would later live. (Although they and their father were no evangelicals!) They sang hymns to popular tunes that people knew. The sermons were in clear and simple language that everyone could understand. Those who wished to convert joined local societies and small groups, where they could learn together. It was very much part of the changing aspect of Britain in the Enlightenment era, changes that would lead to working class politics, self-improvement and the modern world.

“Evangelical” has become something of a dirty word these days. But what it meant in the 18th century was a religion that relied on the Bible for guidance rather than clerical authority (or tyranny, as some saw it), a belief that you really could be assured of eternal salvation, and that spreading this good news (evangel) was the job of all believers. It was religion for the common man.

Like Hoadley (see last week's blog), Dan Taylor also spoke to Royalty. On 11th June 1800, he addressed George III as spokesman for the General Body of Protestant Dissenting Ministers. Probably to appeal for an end to discrimination against dissenters from the state church, which did in fact happen. (Repeal of Corporation and Test Acts, 1828). All this from a miner from Calderdale. The West Riding certainly has produced some remarkable people!