The Millmores of Clayton : A Swanwick Story 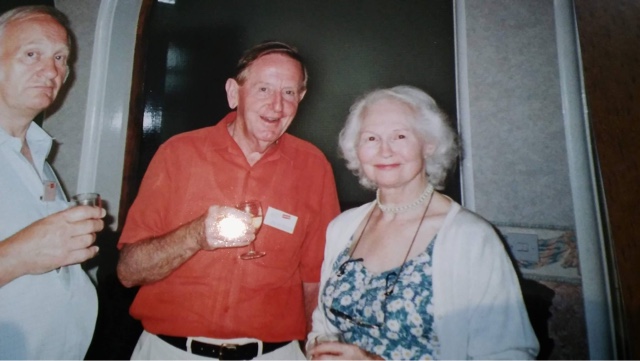 Ann Millmore with fellow-Swanwicker Roy Devereaux, back in the day. Courtesy of Mike Brewer.
Without doubt, one of the highlights of my year is my annual visit to Swanwick Writers' Summer School. This 6-day long writing fest takes place every year at Swanwick in Derbyshire. It's always good to catch up with old friends, meet new ones, to give and receive encouragement and inspiration.
This year was particularly special as it was the school's 70th anniversary. There were special celebrations, '40s themed events (work it out!) and even a giant birthday cake.
One thing that connects the school's past to the present is the Swanwick Yearbook. Every year, delegates are asked to sign their names, along with where they come from. Unsurprisingly on this special year, the book was left open on past years, for current delegates to enjoy the nostalgia. I was reading through the page for 1967 when I came across two names from my home village of Clayton in Bradford. I had no idea that anyone else from Clayton had ever gone to Swanwick before!
I asked around, both at Swanwick and on the Clayton Village Facebook page. It turns out that Royston & Ann Millmore are still fondly remembered by a few veteran Swanwickers. Apparently, Ann was a wonderful ballroom dancer, and Royston enjoyed a game of tennis. He used to bring his own scythe to clear the weeds from the court! 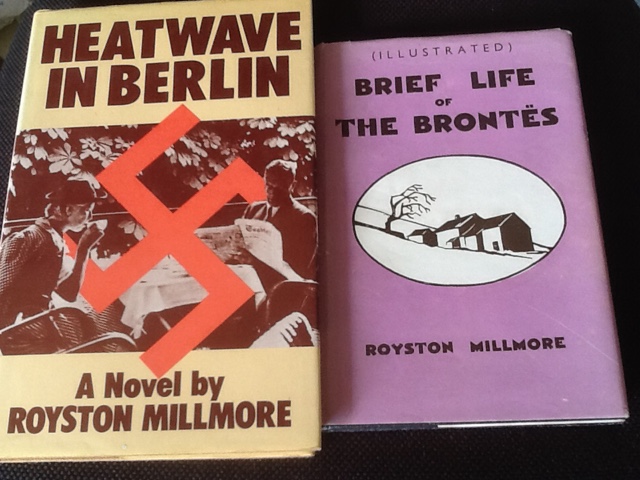 It also turns out that their son still lives in the family home. I contacted him, and he loaned me two books his father wrote, which I have just finished reading. Heatwave in Berlin is particularly fascinating. Though described on the cover as a novel, it is really "faction", a thinly-disguised version of Royston's own experiences as a young man in the 1930s. Royston was a newspaper correspondent - and spy - in Berlin on the eve of WWII, witnessing the rise of the Nazi regime first-hand, at a time when Britain was unaware or indifferent to the true threat. His time there ended abruptly when an assistant editor of The Yorkshire Post (taking over while the boss was on holiday) made the mistake of replacing the usual "From our correspondent in Berlin" with Royston's actual name. He had mere hours to get out of the country, in order to save his neck!
Heatwave in Berlin tells the story of two young men from Fogston (i.e. Bradford) who have come to Berlin during the depression, trying to make a living by teaching English. Eric Johnson (the protagonist) struggles to make ends meet in a dismal flat with a Brownshirt landlord, secretly boiling sausages in his kettle and wishing he had some money to send to his mother. Soon, he finds himself a tutor to both SS officer Baron von Steinfels and elderly, Jewish, Frau Mandelbaum. But in a country where no one dares speak freely, who can Eric trust? Is his girlfriend really an enemy? Is the Baron really his friend? Dare he help Frau Mandelbaum escape the country or will he end up incarcerated?
The story ends a little abruptly for me, but it's an easy read and a real page-turner, that evokes the time from a unique perspective. I enjoyed reading it.
I also enjoyed the pocket guide to the Brontës, which can be read in one sitting. I thought there was nothing about the Brontës that I hadn't heard before, but thanks to first-hand evidence from letters, I was able to discover something fresh in the well-known tale. The book was written in 1947, to celebrate the centenary of Jane Eyre, Wuthering Heights and Agnes Grey, so it's quite amusing to read about "Haworth To-day." "Haworth, unlike the dwelling places of some other great people, is not littered and defaced with commercial references to its bygone geniuses." (1) Right.... As a local lass, I also particularly like Royston's effort to give the correct pronunciation of the word, wuthering. "...correctly pronounced with a deep, resonant "u" as in the word "full"". (2) Get in there, my son!
It's been amazing to discover this set of connections, both at home and in my writerly home-from-home, and to discover a forgotten Bradford writer who deserves to be better remembered.
As the regulars say: That's the magic of Swanwick!
(1) Millmore, R., Brief Life of the Brontës, (Bradford: 1947), p.57
(2) Ibid, p.35
Berlin Bradford Brontës Royston Millmore Swanwick Writers Summer School