Welcome to the 2018 Fairy-tale Blog Hop. Thirteen fabulous fairy-tale authors have gotten together to talk about their favorite fairy tales. Follow the links at the bottom of each blog post to hop to the next author's website. Collect our favorite numbers to total up at the end and enter to win a print collection of our books! (There are several anthologies, debuts, and even an ARC for a BLINK YA book you can't buy in stores yet!)

Dates: Contest runs from Friday, June 22 to Friday, June 29 with a wrap-up party at 7:00 EST. (details to come)
Note: The grand prize winner will be contacted on Saturday. They have three days to confirm and send their address before the prize is offered to the next person.


It's been five years since the publication of my historical fantasy novel Silver Hands. It's based on "The Handless Maiden" (also known as "The Armless Maiden" or "The Girl Without Hands"), one of the fairy tales recorded and retold by the Brothers Grimm.

Re-reading the tale for this blog hop, I was struck by a theme I hadn't considered before. I recently read Kindred by Octavia E Butler, in which the protagonist time-travels to an era of slavery in the USA. And it occurred to me that freedom and slavery are recurring themes in "The Handless Maiden" too.


To win a copy of Silver Hands, remember the number 28. And here's an extra giveaway. I'm currently running my own prize draw to promote my new anthology of flash fiction, Tiny Tales from the Hidden Grove. 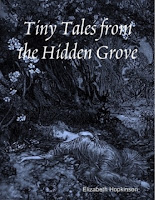 From the author of Tales from the Hidden Grove comes a new collection dedicated to flash fiction. Delve into a pick-and-mix of very short stories, in which Cinderella is a leprosy patient, two housewives knit themselves boyfriends, a nereid appears in Bradford Wool Exchange, and Homer's Iliad is only 50 words long. Includes stories previously published in Binnacle, Flash Flood, .Cent and Byzarium.

Anyone who buys a copy of Tiny Tales or its sister book Tales from the Hidden Grove before midnight on 13th July 2018 (London time) and sends proof of purchase to me via my Facebook Author Page, will automatically be entered into a prize draw to win one of three books donated by fellow authors. More details on this Facebook events page. There are also tickets for checking into the page on the day of the Virtual Launch Party.

Now it's time to go to your next blog: https://quillsquotesqueensquests.wordpress.com/
If you've already visited all 13 blogs in this Blog Hop and collected everyone's favourite number, then go straight to http://shonnaslayton.com/fairy-tale-blog-hop/ and enter to win the grand prize.

Good luck! And thanks for stopping by. If you enjoyed this blog, why not subscribe? Or visit my website: elizabethhopkinson.uk
author blog hop books competition fairy tales flash fiction giveaway handless maiden historical fantasy prize silver hands tiny tales from the hidden grove