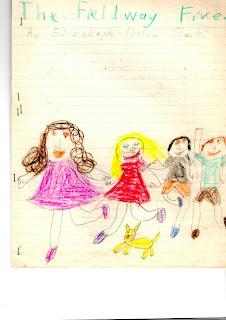 I don't normally write about stuff like this on my blog - I hate controversy and arguments of every kind, which I find distressing - but I felt I must respond to the many adults I read of who have expressed the opinion that educating children about gender diversity somehow amounts to "child abuse."

To that end, I would like to share with you some extracts from The Fieldway Five, a story I wrote when I was about nine years old.  It is my homage to the Famous Five stories, an improbable tale of gypsies and gold mines, which ends with the children triumphantly pushing enormous slabs of gold home to their parents.

In my very un-subtle homage to Enid Blyton, Timmy the dog is replaced by Ann the cat, and tomboy Georgina, who you will remember dresses as a boy and insists on being called George, is replaced by Philip, who prefers to wear a dress while being addressed as Philipa.  As a child, I saw nothing sinister in this; I was just being creative.  Also, my best friend at the time was feeling outnumbered by his three sisters and expressed a wish that he was one of them.  (He has remained comfortably male in the many years since.)

Here are a few extracts from this exciting work of literature (with transcriptions for those who prefer not to read in small, faded pencil): 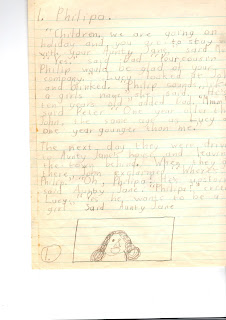 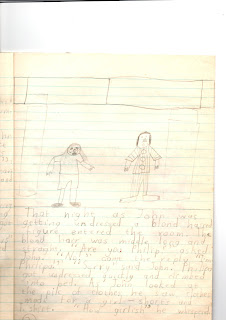 That night as John was getting undressed a blond haired figure entered the room. The blond hair was middle long and straight. "Are you Philip?" asked John. "No!" came the reply. "I'm Philipa!" "Sorry" said John. Philipa got undressed quickly and climbed into bed. As John looked at the pile of clothes he saw clothes made for a girl - shorts and T.shirt. "How girlish" he whispered. 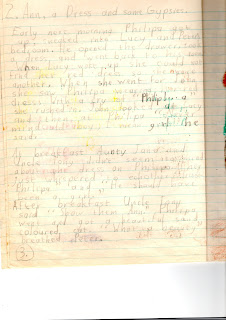 When she (Lucy) went for John she saw Philipa wearing her red dress. With a cry of "Philip!...a" she rushed in. John looked at Lucy and then at Philipa. "Never mind old boy, I mean girl" he said.


At breakfast Aunty Jane and Uncle Tony didn't seem to mind the dress on Philipa. They just whispered at each other "Trust Philipa" and "He should have been a girl."


And the happy ending... 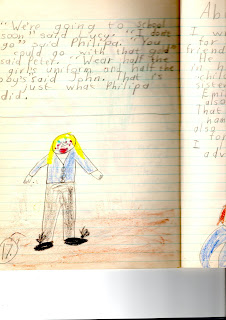 "We're going to school soon" said Lucy... "Wear half the girl's uniform and half the boy's" said John. That is just what Philipa did.

No adult ever told me to write this story.  I wrote it out of the innocence of childhood.  In fact, when I showed it to adults, they became very uncomfortable and said boys couldn't dress as girls.  Their opinion eventually rubbed off, for quite some time.  But the fact is that it's a perfectly innocent story written during a happy childhood.

Adults need to remember what it is to be children.