Yes, There is Such Thing as a Free Lunch! 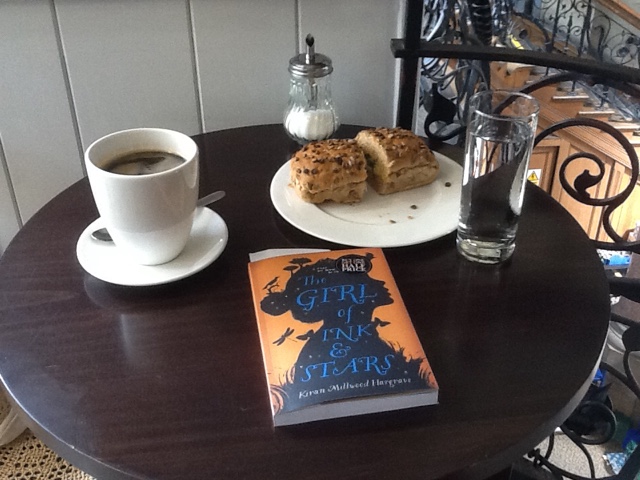 I would like to thank the wonderful people at Waterstones, Bradford Wool Exchange for a brilliant prize that I won a few weeks ago - free lunch and a copy of The Girl of Ink and Stars by Kiran Millwood Hargrave.  You can see the lunch here, right before I ate it!
I've now finished reading the book, which I thoroughly enjoyed.  It's one of those books that is a physical object of desire, before you even start reading the story.  It has maps!  (You've got to love a book with maps.)  Actually, the main protagonist, Isabella, is a cartographer's daughter - hence the ink and stars of the title - and maps play a big part in the story.  The book also has blue and yellow map-themed decoration on every page, and blue writing.  Perfect.
The story itself is a children's/teenage fantasy, set on an island called Joya.  According to myth, it used to be a floating island, but is now divided and ruled by a cruel governor.  However, when Isabella's friend goes missing in the Forbidden Territories, it becomes necessary to explore the forgotten, dangerous parts of the island, the parts steeped in ancient myth.
Something about this book reminded me of Diana Wynne Jones's Dalemark books.  (Why are those books out of print?  Why??)  Maybe the idea of ancient myths becoming reality, or the fact that the story doesn't shy away from politics and death.  But whereas Dalemark draws much of its inspiration from Wales, Joya seems to be influenced by the myths and history of the Canary Islands.  The Tibicenas - demon dogs that feature in the book - are real mythological creatures from Gran Canaria.  The very name Canary Islands means "isles of dogs," and it was said in Roman times that the islands once contained giant dogs, and that their inhabitants took part in dog-worship.  More importantly, the Canary Islands are volcanic, and it is the mythology of the volcano that really drives the plot of the book.
I don't think I've ever read a Canarian fantasy before.  (In fact, I didn't realise that's what I was reading, until I looked it up afterwards.  I guessed at the Caribbean and Hawaii while I was actually reading.)  To be honest, the real place behind the setting doesn't matter, but I did like the mixture of ethnic backgrounds implied in the story.  I also liked the friendships and the very understated, blossoming romance between the teenage characters.
I should also tell you: the book has a wistful but very magical ending.  But I won't tell you what it is!  You'll have to read it for yourself.
book review Bradford mythology The Girl of Ink and Stars Waterstones young adult fiction