The Scandalous Lady at Harewood 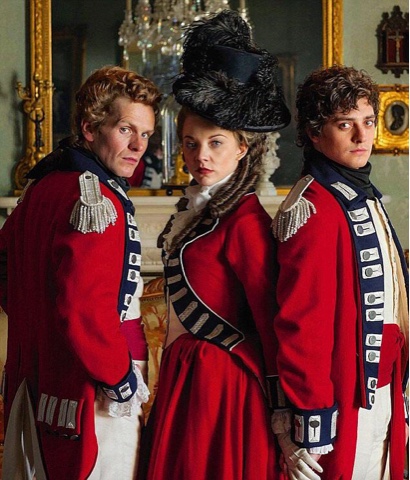 Shaun Evans, Natalie Dormer and Aneurin Barnard in The Scandalous Lady W. Photo: BBC2.
Today, I enjoyed a family day out at Harewood House, near Leeds, West Yorkshire.  One of the things I was most looking forward to was a chance to see the portrait of Seymour, Lady Worsley, subject of BBC2's recent courtroom drama, The Scandalous Lady W.
The BBC2 website has this to say:
"In 1781, wealthy heiress Seymour, Lady Worsley, caused outrage when she cuckolded her husband, respectable MP Sir Richard Worsley, and ran away with her lover Captain George Bisset. Furious, Sir Richard responded by suing Bisset for criminal conversation and demanding a record £20,000 for the damage done to his property - Lady Worsley. While Seymour and Bisset hid out in a London hotel, Sir Richard and his lawyers set about proving his wife's infidelity through a series of devious schemes. When the case came to court, Sir Richard lied about his relationship with Seymour, painting a perfect picture of their marriage and persuading others to do the same. Bisset looked sure to be facing penury and prison until Seymour devised a bold plan. To save her lover from ruin, she disclosed a shocking secret - one that astounded the court, put her reputation in jeopardy and turned the trial into the greatest sex scandal of the eighteenth century."
But what is Lady Worsley doing in Harewood House, when she lived in Hampshire? 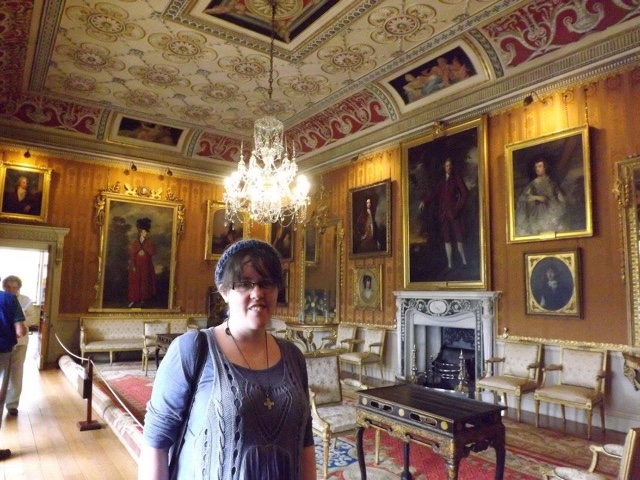 Myself at Harewood House. Lady Worsley's portrait in the background (dressed in red). Edwin Lascelles above the fireplace.
She was the step-daughter of Edwin Lascelles, who inherited the Harewood Estate in 1753 and built Harewood House.  The same room in Harewood houses three portraits by Joshua Reynolds - Edwin Lascelles, Lady Worsley and her sister, Lady Harington.
It seems that scandalous Seymour was getting into trouble long before the court case.  Harewood House displays a letter revealing her antics there over Christmas 1778/9.  Here is an extract:
"I have a good story of some ladies, some of whom I believe you know.  There has been a great masquerading this Xmas at Harewood, and all the rooms both ladies and gentlemen were thrown open and made common.  Lady Worsley and two Miss Cramers threw most of the gentlemen's clothes out of the window, particularly their breeches, thinking them I suppose unnecessary.
One night these three heroines desire of Lascelles to lend them his coach up to Leeds, which he refused.  They therefore took the cart horses and rode them.  They stopt at one of the inns and told the waiters to show them into such a room, which he could not do, as it was kept for the officers of the Militia and their Colours etc were there.  But they were determined to go in, and took the pokers and broke open the door.  Then they heated them red hot and poked them into the Colours which set them into a blaze."
The letter goes on tell how the ladies then sent for a gentleman - "a principal person of Leeds" - who dressed in his best to meet them.  But they were waiting for him, one with water and one with soot, which they threw over him and his fine clothes.
You might think that was enough pranking for one Christmas, but the letter says they went on to Canon Hall (another country house in the Leeds area).  There they broke open Spencer's (the owner's) library, threw all his books about and took away a pocket full of bank notes.
According to the letter: "They were three days on this expedition."
All this makes me wonder more about Seymour, Lady Worsley.  Throwing underwear out of the window sounds like a harmless prank, but stealing bank notes, wrecking a library and burning flags makes the three young ladies sound like upper class delinquents.  Was Lady Worsley quite the innocent victim the BBC made her out to be?  Of course, throwing water over a dignitary is nothing like as serious as forcing your wife into sexual perversion (if that is indeed what Sir Richard did).  But still... Why did she behave like that?  You could say that Seymour and her friends were getting back at men for having all the power, and rebelling against their role in society.  Or that they were scarred by what they suffered in marriage.  Or alternatively, that they spent Christmas 1778 acting like spoiled brats.
We may never know the truth...
Scandalous Lady W quotation from bbc.co.uk
Letter to Mr Hewett, dated January 20th, 1779, copied by hand from the original by me.
18th century Harewood House Scandalous Lady W
Location: Clayton Clayton