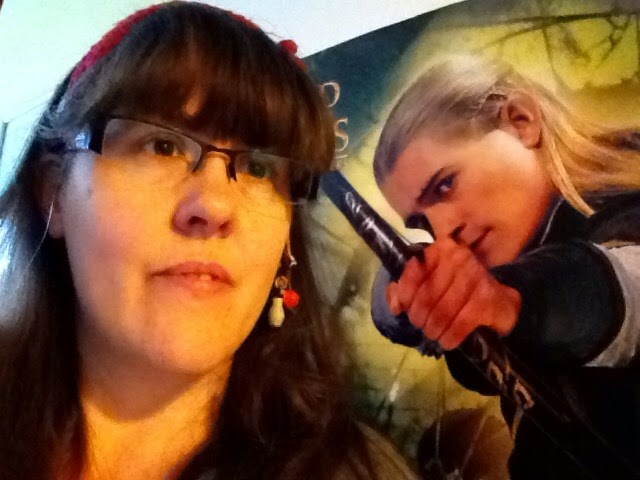 Two years ago, when the first Hobbit film came out, I took a retrospective of my relationship with Lord of the Rings, and Legolas in particular.  I commented that it was ten years since my first fan poem, "Legolas", which was to spark a whole wave of fan fiction, and lead me back into creative writing as a professional.
Now, fresh from viewing the final Hobbit film, I would like to complete that retrospective (although my writing relationship with Middle-earth will never be ended).  It has been wonderful to see Mirkwood on screen, to see Legolas and Thranduil together, and to see another person's angle on those classic fan girl questions: "What was Legolas doing during the Battle of the Five Armies?"  "Did he really get on badly with Thranduil?" And, "What about Legolas' mother?"  I'm sure a lot more of those thoughts will come out on the extended DVDs, but for me, watching the Hobbit films has been like being inside a living fanfic, revisiting so many of the places I went in my own writing.
Since my fanfic days, my own writing has moved on a lot.  In 2013, my first novel, Silver Hands, was published.  I sent a copy to Orlando Bloom.  I was blessed to receive a lovely signed photo in thanks.  That very week, a rave review of Silver Hands came out in Wellington, New Zealand.  Connected?  I'll never know.  But it goes to show that the Lord of the Rings connection goes on and on.  It will never cease to be godparent to my writing.
So, by way of farewell (until the next time) I would like to print, "The Mirkwood Lament", written in June 2003.  I think it says it all about Legolas and Thranduil's relationship.  And, no, I don't think Thranduil would ever say this to his face.  Thank you, Lord of the Rings.  A star shone upon the hour of our meeting.
The Mirkwood Lament
When shades of night are falling upon the leaves of green
A figure like a shadow of a shadow may be seen.
Fair is his face and blue-grey are his eyes.
The Elf-King of the forest, to the forest night he cries:
"Alas for my woods, which once were proud and great.
Fading is their glory as the years grow late.
Fading are my people, as shades that meet the day,
And no more shall men see them, seek though they may."
When the autumn leaves are falling red and gold
Amidst the swirling mist, his voice sounds clear and cold:
"Alas for my son who hunted by my side.
The quest was set before him and he would not be denied.
I saw the sea reflected in his eyes of blue and grey.
The Blesséd Isle had called him, no longer would he stay.
Oh, Legolas!  Legolas!  The deer are on the heights
But no more will you hunt with me by cold starlight."
When the boughs are swaying in the soft summer breeze
The song of the Elf-maidens comes stealing through the trees.
"Where now is Legolas, of all the Elves most fair?
White was his forehead and golden was his hair.
We put our question to the moon, but he would only say
That Legolas went sailing in a ship of Elven grey.
Oh, Legolas!  The harpists play a sweet and mournful tune
But no more will you come to dance with us beneath the moon."
Hobbit Legolas Lord of the Rings One Last Time Thranduil
Location: Clayton Clayton