The Sailing of the Hopewell 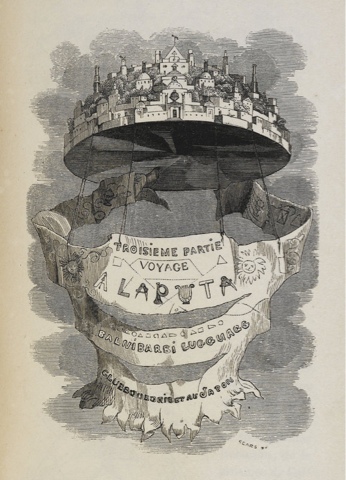 5th August is an important date for Gulliver's Travels fans.  It is the date on which Gulliver embarks on his third voyage, aboard the good ship Hopewell.  This journey will take him to the flying island of Laputa, the Academy of Lagado, Luggnagg (home of the Struldbrugs), the necromancer's island of Glubbdubdrib, and the only real-life place Gulliver ever visits: Japan.
I made use of this in Silver Hands, having Margaret embark on the same ship on the same day in chapter four, "The Sailing of the Hopewell".  The name of the ship, Captain William Robinson and any dates I mention are all straight from Swift.  He was having a laugh at the expense of travellers's tales (and making some satirical points about matters closer to home) but I tried to re-imagine the Hopewell as a real ship in the context of the times, a context of the East India Company, the golden age of pirates, and scientific discovery.
In common with many fantasy and sci-fi writers, the Third Voyage is my favourite.  It's the most crazily fantastic and, in my opinion, the funniest.  It has mad, pointless diagrams, almost steampunk inventions and - well - what can beat a flying island?  From the man who "had been Eight years upon a Project for extracting Sun-Beams out of Cucumbers, to the king who grants Gulliver "the Honour to lick the Dust before his Footstool", the whole thing fizzes with glorious eccentricity.
And possibly the most eccentric thing about it is the devision to include Japan in the line-up of island nations Gulliver visits.  My theory (as I mentioned in the author's notes to Silver Hands) is that Japan was so far away from Britain, and so mysterious due to the Sakoku (closed country) Edict, that it may have seemed almost fictitious to Swift's readers.
If you have never read Guliver's Travels - and thought it was only about tiny little people - embark on the Hopewell and start reading Book Three today.  Just don't forget to strike your forehead seven times against the ground before you speak!
Book fantasy fiction Gulliver's Travels historical humour Japan reading silver hands steampunk Swift